It was hard to enjoy the great music amid chaos and XXXTentacion tributes. 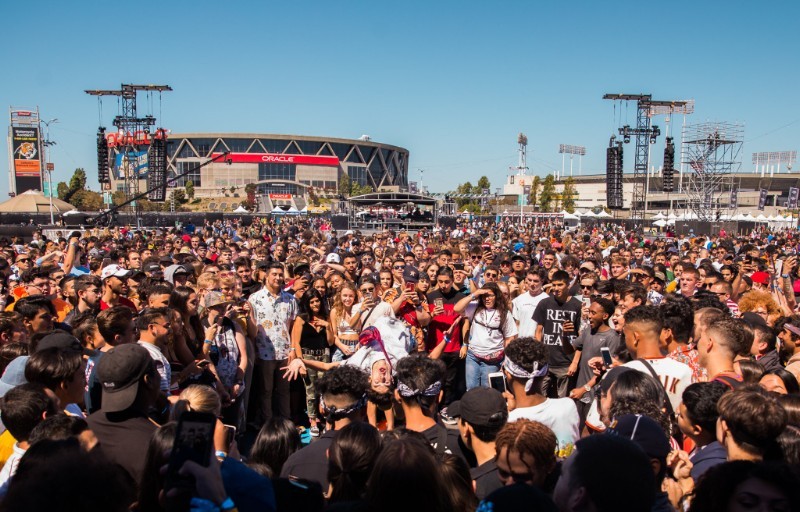 There’s not much to Rolling Loud beyond its lineup. Now in its second year in the Bay Area, it’s hard to tell if the festival is suffering from growing pains or if it’s suffering from the pains of being a half-formed idea coated thinly in an Instagram-friendly varnish and then exported across the country before the varnish has even had the time to fully set. To put things mildly, this past weekend's festival — its first foray into Oakland — was a hot mess saved only by a handful of truly excellent sets.

Day one of the festival was for moshing. From Jaden Smith to Playboi Carti, artists moved their sets in fits and starts as they paused to tell the crowd over and over to open up the pit. No one listened, of course, but it was hard to tell if it was more because anyone had the nerve to show up to a Playboi Carti set unprepared to mosh or because festival organizers had set up VIP seating throughout the crowd making it difficult to move freely — or even just stand still — within the crowd.

In the end, no one won. Fans grew more and more impatient with Carti’s pauses. Meanwhile, the rapper refused to continue until the pit actually opened and then finally ended his set abruptly.
If there was one presence at the festival that was impossible to ignore, it was, regrettably, XXXTentacion’s, who was recently killed. His image popped up not only during other performers’ tributes to the late rapper — Ski Mask the Slump God unfurled a giant flag with a photo of the late rapper on it during his set — but also on Instagrammable photo-ops set up throughout the festival.

More than the tributes offered by friends, it is the institutional memorial of X that is disturbing. On one hand it is hardly surprising given the symbiotic relationship between the rapper and the festival. Some of the festival’s earliest iterations feature X. The Bay Area debut of the festival, too, gained traction from the rapper’s controversial inclusion on the lineup in light of the recently-leaked testimony from the victim of the rapper’s domestic violence.
And yet, just because it is unsurprising doesn’t mean it’s excusable. The history of the festival has been intimately woven with the X’s history, including his history of violence against women and queer people. And now, even in his death, resources are being allocated to preserve his memory that would quite frankly be better allocated literally anywhere else.

Lil Uzi Vert closed out the night at one of the festival’s two stages, framed by two inverted crosses and a giant glowing skull. His rapping was fine. His dancing was excellent. But it was his plaintive autotuned vocals that echoed acapella throughout the festival grounds that really made the night feel worth it in spite of everything.

First the bad news: the second day of the festival was somehow even more poorly organized than the first. As the day went on, more and more of the festival went on lockdown, limiting access to viewing areas for no stated reason. Bottlenecks abounded at every passage point and navigating the festival began to feel impossible even though it was housed in Oracle Arena's open parking lot.

The good news? Sunday’s sets made up for the total chaos by bombarding fans with pleasant surprises all night. E-40 brought out fellow Vallejo rappers and rap wunderkinds SOB x RBE for a quick performance right in the middle of his set. It’s pretty unlikely that the crossover would have worked anywhere but here — in theory the overlap in the venn diagram of E-40 fans and SOB x RBE fans is just people from Vallejo and die hards for anything that comes out of the Bay Area. And yet, it resulted in one of the festival’s most exuberant moments as E-40’s crowd sang along to SOB x RBE's “Anti” and got hyped for a run through the E-40’s most iconic songs. Unfortunately, at this point in E-40’s decades-long career, his festival-ready highlights reel most prominently just consists of a feature on a Big Sean song.

Rae Sremmurd’s set was the highlight of the weekend — and not just because the duo threw dozens of blunts into the crowd. Slim Jxmmi and Swae Lee moved across the stage and even into the crowd with a pulsing energy that never let up. The duo knows how to stir up a crowd. Hopefully it’s only a matter of time until it reaches headliner status.

With just a handful of months until the festival’s second round in SoCal, there’s a lot it needs to pull together functionally and administratively to live up to its star-powered lineup.