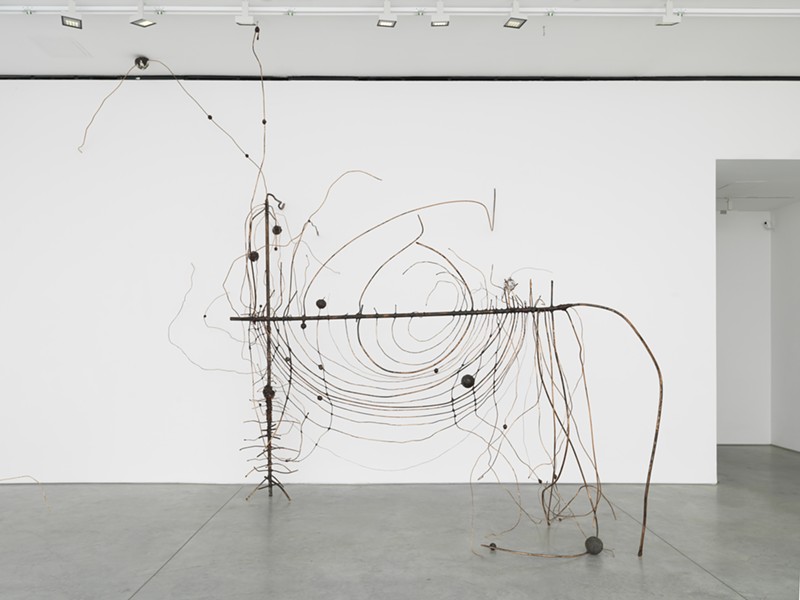 Marfa, a tiny town in the West Texas desert, seems like an unlikely cultural center for contemporary art. Evoking Hollywood visions of the Wild West, tumbleweeds decorate the landscape and the population numbers under 2,000. But since minimalist artist Donald Judd made the barren desert town his home in 1971 and founded the Chinati Foundation, it's become one of the most vibrant art towns in America.

Much of Jay Heikes' works featured in his new exhibit at the Berkeley Art Museum and Pacific Film Archive (BAMPFA) are influenced by his 2017 residency in Marfa. Heikes' exhibition is the first one of 2018 the museum has chosen to display as part of its MATRIX program, which introduces Bay Area audiences to outstanding voices in contemporary art. The Minneapolis-based artist drew inspiration from the intensity of the landscape as well as the proximity to the Mexican border. Heikes was in Marfa during Trump's inauguration, so the rhetoric of putting up walls and demonizing the Other was fresh in his mind as he worked.

One piece in his Z series — a collection of paintings referencing the last letter of the alphabet — appears to be a boarded-up window, dyed black and coated in patches of white salt.

"There's a lot of boarded-up buildings — a very romantic landscape artists love — so I collected a lot of scrap wood to make these paintings," said Heikes. The salt shines starkly against the dark ink, as though a light from the desert landscape is escaping through the window. A backwards letter "Z" criss-crosses the frame — a visual metaphor that alludes to the end of language and the passage of time. Many materials from the desert made their way into Heikes' paintings. Another work from his Z series features acorn husks, rubber snakes, steel slag, salt, rocks, and dirt to create a roughly textured, dusty pink snapshot of the desert floor mounted on a fiberglass tray.

"There was no canvas," said Heikes. "This was just a frame that accepted all the materials."

The son of a chemist, Heikes has an obsession with the material properties of objects, which permeates each of his pieces. He spoke excitedly about the histories of various materials he used in his work, such as one that was used in a pigment called "mummy brown." Egyptian artists in the 16th and 17th centuries would grind up remains of mummies to achieve this specific hue.

Heikes' sculptures pay careful attention to elemental components as well. "Couper l'oeil," a massive sculpture composed of copper, wax, aluminum foil, steel, steel slag, cast bronze, and iron, is a reference to Luis Buñuel and Salvador Dalí's surrealist film L'Age d'Or in name — there's a scene in the film where an eyeball is being cut with a razorblade — but Heikes also describes it as a battle of materials. In this piece and in another sculpture in the exhibit, "Winter is Coming," balls of different sizes and textures branch off of spiraling copper wire, some fully detached and lying at the base of the sculpture. One ball is made of bronze poured over dense wood; another is made of mortar, wax, and studio dust.

"I think of it as this artery system of thought," said Heikes. "These moldable wax balls are the thoughts before they're fully formed."

The unique hybrids Heikes has created illustrate these exploratory thoughts, as he constantly combines things that don't normally go together. He refers to these hybrid balls as "minor planets," a term referring to floating debris in space that is classified as neither a planet nor a comet.

That feeling of alienness comes back to the theme of borders and walls in America's current political climate. "Couper l'oeil" evokes a wire fence unravelling at the seams — Heikes' own subversive attempt at tearing down boundaries.

For within his exhibit, there are no boundaries. Copper wires jump out of paintings; ink drawings he made with a special tool he called a "pencil rake" designed to imitate the marks of a seismograph echo the curves of the sculptures; even Heikes' musical background seeps into his work. He mentioned a collector had described the lines in his drawings as the "melody of the universe." Sketches such as "The Devil Has Left My Building" illustrate a soundtrack to the formation of Heikes' imagined elements.

Art may not solve political divisions and demonizing language, but it can certainly help people heal. Gesturing to the curved body of a snake screen-printed onto one painting, Heikes explained, "The flow of a snake going sideways to go forward is really the best metaphor for artistic practice."