Boss Robot Hobby in Elmwood Closes After 15 Years in Business 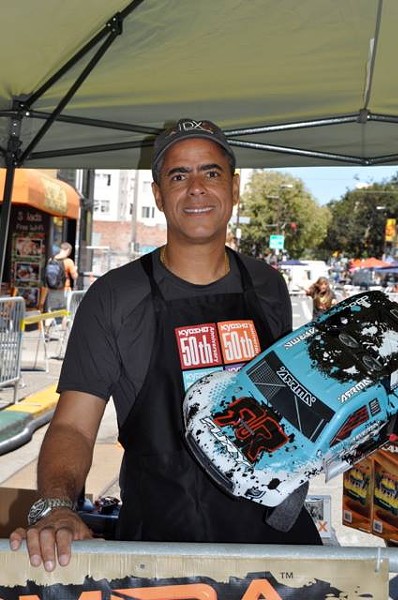 Boss Robot Hobby closed its doors this weekend after 15 years in business. The tiny store in Berkeley’s Elmwood district was stocked to the brim with remote-controlled cars, airplanes, and helicopters, as well as vintage Japanese toys and comic books.

Owner Johnny Williams was inspired to open the store when his 6-year-old son begged him for a remote-control toy boat. After finally giving in and shelling out the $40, the boat turned out to be a disappointment. His son told him that “the packaging was better than the toy,” said Williams.

This got him thinking: Were there better products out there? Underwhelmed by the results in his search for reusable and reparable toys, Williams decided to open Boss Robot Hobby.
“I wanted to create something that was reminiscent of things I saw and experienced as a kid,” said Williams. “I just used to hang around places until someone taught me something.”

The store aimed to be a welcoming, stimulating space for kids and adults alike, with a race track upstairs for children to play with after school and collectible art toys that appealed more to the older crowd. Williams even organized informal events outside the store, meeting with groups at the Chabot Space and Science Center or the Berkeley Marina to race remote-controlled cars and fly airplanes.

“It was really groovy,” said Williams. “We would have everyone from police officers, fire department people, doctors, to just every kind of person out there doing remote control.”

Boss Robot Hobby closed due to unanticipated changes with its main supplier, Hobbico, one of the last employee-owned American hobby companies. Hobbico recently filed for Chapter 11 bankruptcy following a lawsuit for patent infringement by Traxxas, another hobby toy manufacturer. Williams said Traxxas' products aren't as good as Hobbico's, and Boss Robot Hobby prided itself on selling durable toys, instilling in children the ideals of lasting value and reusability.

Williams said he's unsure what’s next for him, but that opening another business in the same space is within the realm of possibility. His wife, Doris Moskowitz, owns Berkeley’s beloved Moe’s Books on Telegraph Avenue, so business runs in their blood. But for now, he’s just happy to have had 15 fruitful years with Boss Robot Hobby, a business that not only endured the recession, but actually grew.

“I got to meet a million people, changed people’s lives, and a lot of people that generally wouldn’t have hung out together got to mix,” said Williams. Folks from all over the East Bay found a special community in the space. His impact was tangible: some children who were customers have gone on to pursue engineering and other relevant fields, and he even had the rewarding experience of working with developmentally challenged kids to find things they could build and engage with.

He doesn’t see the end of the small but mighty store as a failure; rather, he sees it as an opportunity for something new and just as wonderful to happen.