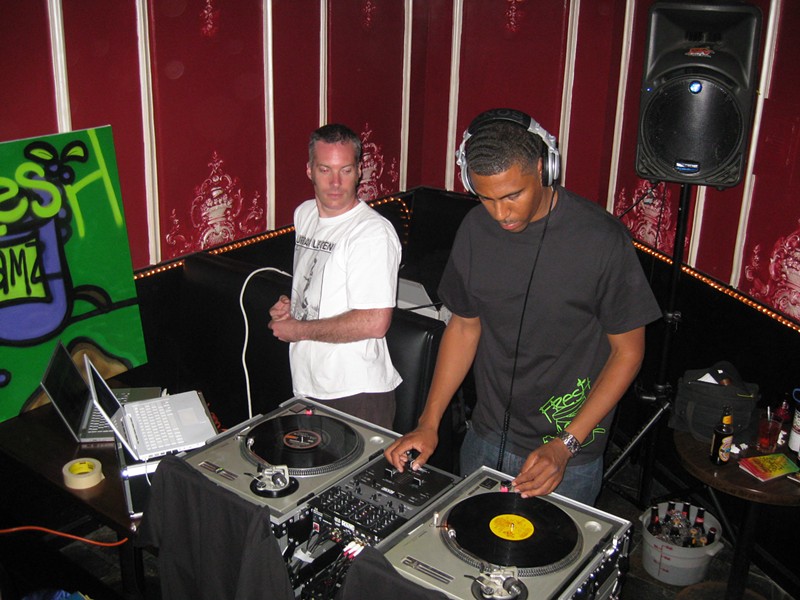 A lot has changed in Oakland in the past decade since Odiaka Gonzalez (DJ Odiaka) and Peter Delgado (DJ Delgado) started the Fresh Jamz party. The Town certainly wasn’t the food mecca it is today, neither did it have a vibrant and eclectic nightlife — to the contrary, people in Oakland were struggling due to the recession, and businesses were failing.

DJ Odiaka knew that a party was needed, one that would cater to educators and those working in nonprofits (Delgado and Odiaka both work in these fields respectively), a happy hour party where people could relax and de-stress. One day when Odiaka, his then-girlfriend (now wife), and a group of educators were hanging out at the Parkway Lounge, the idea of Fresh Jamz came to life.

On the verge of the 10-year anniversary of this Oakland nightlife favorite, the Express chatted with DJ Odiaka about what Fresh Jamz has meant to Oakland’s nightlife scene. We also talked about the changes and bumps along the way after the abrupt closure of The Night Life, the venue where Fresh Jamz had set roots for more than five years, and the up-coming new residency at The Legionnaire, starting with the anniversary party on Friday, Jan. 26.

The first half of Fresh Jamz' residency took place at the Parkway Lounge on Park Boulevard, but the DJs weren't happy with the situation. “We decided that we needed to find another location, and we ended up taking a year off,” said Odiaka.

When The Night Light opened in Jack London, Odiaka saw the perfect opportunity to bring Fresh Jamz to a new location. “I knew Doug [Kinsey, former owner of the now-closed venue] from him working at Radio and Kitty’s,” Odiaka said. “He loved the idea of bringing a party with an already established crowd to this new spot.”

Fresh Jamz was one of the most successful parties at The Night Light. Happy-hour aficionados knew that the fourth Friday of every month was the time to relieve stress and let loose.

In between the monthly happy hour parties, a new idea arose — a daytime weekend party at Lake Merritt. “A lot of the folks who come to Fresh Jamz are on a school calendar, so the summer was always kinda weird with having the happy hour party,” he said.

So far, they have done four parties at the lake; the one last summer had more than 400 people in attendance. He explained that obtaining permits has been a challenge. “It’s one person doing the permitting for all the parks and recs; I understand why it’s hard, it’s inadequate, being paper forms and not an online system.” Still, these bureaucratic obstacles won't derail another party at the lake planned for this summer.

When The Night Light abruptly closed last September, the week the monthly Fresh Jamz was supposed to take place, the team was left scrambling and ultimately decided to forgo that month’s event. The DJs were left wondering what the fate of the party would be.

After a much-needed break for both DJs, Fresh Jamz is coming back stronger than ever.

The party is officially re-launching its residency at its new location, The Legionnaire, and moving to the fifth Saturday of the month. That means this year they'll host five parties at the Uptown venue, plus one at Lake Merritt and pop-up parties throughout the year — the first one will be at Off The Grid at the Oakland Museum of California in March.

DJ Odiaka and DJ Delgado remain committed to Fresh Jamz being a community party, a special place for educators and those working in the nonprofit sector to decompress and mingle with friends.

As for what’s next for Fresh Jamz. Said Odiaka: “I want to see how we can use this platform to help — what are some causes that are dear to our heart that we can help educate on and support. How we can highlight other businesses, expand people’s horizons of Oakland.”