The Story Behind Marshawn Lynch's "Everybody vs. Trump" T-shirt

Mistah F.A.B. designed the shirt, which has since inspired knockoffs. 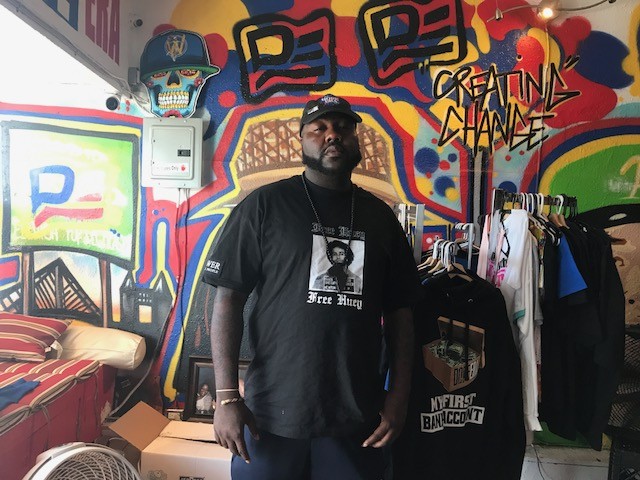 This past Sunday, the Oakland Raiders were all over the headlines: In their loss against the Denver Broncos, quarterback Derek Carr injured his back and will be out for 2 weeks — possibly longer — according to ESPN.

And before the game even started, Raiders running back Marshawn Lynch was seen wearing a T-shirt that read "Everybody vs TRUMP." After Jeff Eisenband of The Post Game tweeted a screen grab, the image quickly went viral on social media.


The "Everybody vs." slogan is nothing new; the creators are from Detroit, and their company is appropriately called Detroit Vs Everybody. However, the shirt worn by Lynch is by the Oakland-based business Dope Era Clothing Company. The owner, none other than Stanley Petey Cox, better known as Mistah F.A.B, is a North Oakland rapper, activist, and community organizer, and he also happens to be Lynch’s cousin.

The Express caught up with Mistah F.A.B to talk about the shirt and the message behind Lynch wearing such a powerful statement.

“We didn’t want to infringe or disrespect anyone with the 'Everybody vs.,' we just wanted to give it our twist to it,” Mistah F.A.B. told the Express during an interview at his Dope Era Clothing Company store in North Oakland. “Who’s our biggest adversary today in America, Trump, for allowing to uphold the policies that pose suppression. Silence sides with the suppressor."

Mistah F.A.B said he gave the shirt to Lynch two days before the game and asked him to wear it. “You never know with him, when you don’t think he is gonna do something he does it,” Mistah F.A.B said. “He shares the same sentiment we do. He’s a rebel. He’s a great individual. He wasn’t trying to do it for an uproar.”

"He shares the same sentiment we do. He’s a rebel. He’s a great individual. He wasn’t trying to do it for an uproar." tweet this
(Lynch also sat during the game's national anthem. Although he was out of view during the telecast, SB Nation later posted an aerial view showing him shielded by Raiders staffers — perhaps an intentional maneuver to prevent further controversy.)

By the end of the day on Sunday, Mistah F.A.B.'s "Everybody vs TRUMP" T-shirt was completely sold out. “You could definitely feel the impact of his influence,” he said. “We got a lot of people supporting this movement.”

But other companies were quick to create their own version of Dope Era's design. While Dope Era’s T-shirt retails for $45, other companies began selling it for as low as $15 on Amazon. “Things go viral," said Mistah F.A.B. "To say 'ripping off,' or things like that, I mean, they were influenced by it. Unfortunately, we live in a capitalist society. I can’t say anything about it. That’s the way it works in business.”

Mistah F.A.B. said he's not looking to get rich off his T-shirt. His clothing store Dope Era has been opened for more than four years, and locals know it and love it. (Back in April, the store was damaged by fire; Mistah F.A.B. suspected it was due to arson.)

“Our message is not to promote fashion,” he said. “We want to continue to galvanize and organize the community and let people know that together we are far more powerful than separated.”

Recently, Mistah F.A.B shot a video with a group of men all wearing the “Everybody vs Trump” T-shirt. The video is for the song “Dear Mr. President,” which was released in April.

The lyrics of the song share a powerful message aimed at Trump: Mr. President, I don't wanna cause no trouble/But then again the ghetto is the reason why we hustle/Tell us now, be for real, what's your beef with Mexico?/You think buildin' up a wall really send a message though?

Us down here in the ghetto Riding for what's right!!! How about you!????????? Dope era forever WWW.Dope-era.com Photo by @chali_ray

Does Mistah F.A.B think there’s hope for Trump to turn things around? “Not at all, he said. “Trump’s purpose is not about turning things around. It’s about utilizing a negative narrative for the agenda that he is doing, continuing the spread of wealth among his friends and colleagues.”