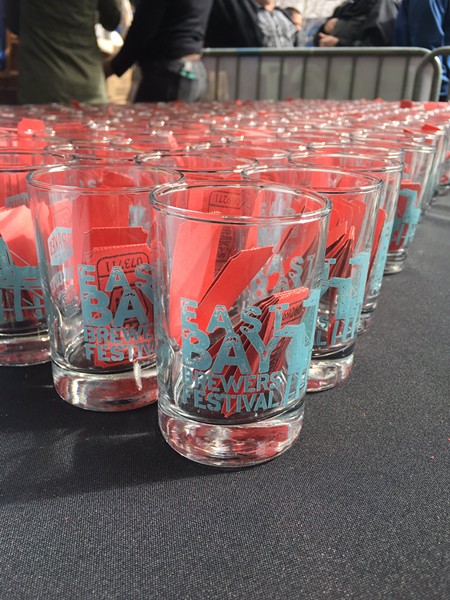 Some terrible news: It's the last day of San Francisco Beer Week.

The annual gathering was actually nine days of some of the best brew in the world, from locals offering once-a-year favorites (think triple-IPAs from everyone from Altamont to Russian River) to out-of-town guests (Jester King, Sante Adairius thrilling the Bay with pop-up events). And now — exhale — it's done.

Hopefully you didn't miss out on the many highlights (the Mexican Beer tap-takeover at Trappist, the secret gala pop-up by Fieldwork in S.F., and so on).

And I especially hope that you made it to yesterday's debut East Bay Brewer's Festival, which for the first time united brew offerings on our side of the bridge. Hey, even the mayor was there.

Mayor @LibbySchaaf in the house at East Bay BrewFest to kick off the Oakland Ale Trail. pic.twitter.com/DLI3xdmSbp

Anyway, more than two-dozen breweries poured special offerings and taproom favorites at the sold-out event, which was hosted by Drake's outside its downtown Dealership location in Oakland (disclosure: The Express was a media sponsor).

After days of rain and wind, the sun peeked out for the afternoon showcase, which drew some 900 attendees. There were all sorts of inventive beers — from gin-barrel-aged sours and lupulin-powder IPAs.


The take home from the event was that, even though S.F. gets all the press, East Bay breweries are putting out some of the most exciting and consistently tasty beers on the West Coast. Here are five of the most memorable beers from the day:

Temescal first released four-pack cans of this brew earlier in the week, and I was initially skeptical, what with my aversion to fruited IPAs. However ... what a remarkable brew: gentle notes of vanilla and cream, a nice stone-fruit character, and that familiar and delicate Temescal body. Better than anything you'd find on the ice-cream truck.

Award for Best Name this Beer Week goes to Faction for this sharp, dry, low-ABV brew with a hint of mango. The perfect remedy to White House nonsense — and conveniently only 4.6%, since you'd have to drink a few of these every day to counteract The KellyAnne & Bannon Shitshow.

This Altamont banger kicked the haze craze in its teeth. A big-dog IPA, complete with all that hazy-brew character (tropical juice, via a generous dose of Mosaic hops, and killer aromatics), but without any cloudy gimmicks — more, please.

Novel is a new neighborhood spot, but this classic BA stout hit all the right notes: gently boozy, a nice roast and vanilla character, not too sweet and with a mouthfeel at once full but not viscous. Tremendous executive by a new spot on the block.

I missed the launch party for this one at Eli's Mile High Club on Friday, so it was nice to hit the hop-palette reset button with this malty, "classy" head-changer. Yeah, I get that it's an unremarkable, no-frills brew. But it scratched all the right itches. And that's sometime all that matters.