October 29, 2016
2 comments
It's since been deleted, but there really was a post-World Series Twitter feud between the Oakland Athletics' official account and '90s pop-rock hitmakers Smashmouth last night.

It began after Cleveland beat the Chicago Cubs in game three of the Series, with the only run of the night coming from a Coco Crisp RBI.

And that's when Smashmouth, who got its start in nearby San Jose, started talking trash:

To which the official A's account promptly shot back:

But his interjection was just fuel on the fire: 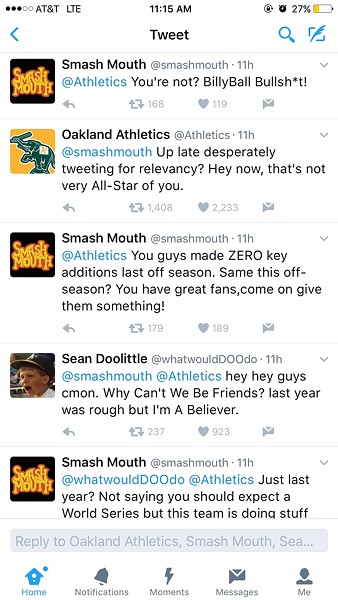 Admittedly, that's some real talk from the straight from the Smash's mouth.

At this point, The Smash tried to de-escalate the feud.

But A's official didn't let up:

(Note that it is now midnight.)

At this point, Smash was running out of material:

And then, as quickly as the Twitter war kicked off, it was over. Until this morning, when A's official deleted the evidence and posted an apology:

Hey @smashmouth - sorry we let our competitive juices get the best of us. Tickets and a 1st pitch are on us anytime you're in the East Bay. pic.twitter.com/wfsKcBr1NW

To which fans responded:

@Athletics @smashmouth The intern who battled smash mouth should get a raise and full time position. Truly a legend in the sports twitterverse.

Smashmouth has yet to reply to the A's offer.