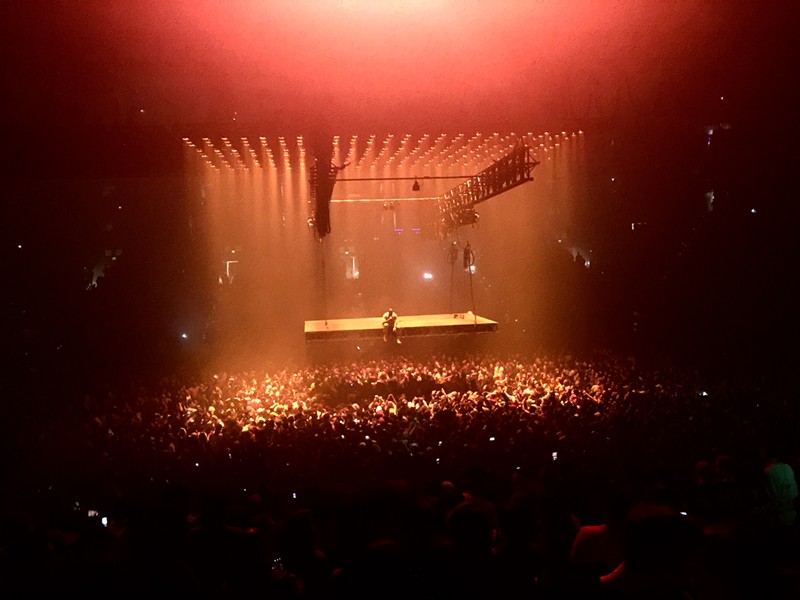 Kanye West's part road show, part therapy session made the first of two stops in Oakland at Oracle Arena last night. And the performance — a nearly-two-hour rundown of hits old and new, peppered with several lengthy rant-soliloquies by the contentious rapper — probably satisfied only the most rabid, wide-eyed Kanye adorers.

This tour, in support of West's recent The Life of Pablo record, featured a minimalist production design: For the entire set, West stood alone atop a "floating" stage, which hovered over a moshing, photo-snapping crowd. He was anchored to the stage by a bungee rope, which connected to his upper back, and was lit only by dim bronze light, so it was difficult to catch a glimpse of his face during most of the night.

At one point, West told the crowd that his previous tours were stellar shows, but that they weren't profitable, because of the elaborate production. He didn't go so far as to call this latest tour on-the-cheap, but he referred to it as his "most profitable" one.

The setlist featured hits old and new — from "Famous" and "Jesus Walks" and "Black Skinhead" and "Flashing Lights" — which were often abridged or interrupted by a prodding West.

For instance, Yeezy stopped five times in the middle of "Famous" to complain and egg-on the crowd, reminding the nearly-sold out Oracle that they were about to witness a "legendary moment in concert-going history."

It wasn't. In fact, after more than ninety minutes, this writer left early to beat the ride-hauling surge.

But there were still golden-nugget moments during the meat of West's set. Here are the five most memorable things that tumbled out of Kanye's pie-hole last night in Oakland:

1. West whined at length about the Grammy's, calling it rigged. The rant was not unlike a Donald Trump stump speech, and he even promised to boycott next year's event if Frank Ocean's Blonde doesn't rake in Grammy hardware. "If that album isn't nominated ... I ain't showing up to the Grammies," he promised.

2. Kanye stopped the show many times during the night to criticize the media for labeling him crazy and, specifically, a New York Post Page Six story this week on how Jay-Z thinks Kanye is a "nut job."

"I'm not crazy, I'm brave," West assured the crowd at one point, to cheers. "I'm gonna let the cat out of the bag right now: I'm not crazy. I'm absolutely a fucking genius."

4. Ye also dinged "the media" for amplifying this screws-loose narrative. He even called us out directly: "To the media, I'm one of y'all!

"Stop writing negative shit about me and help me help people."

5. After a while, the show devolved into what felt like a lower-division lecture hall experience, with West seated on the edge of the stage, feet dangling over a crowd aiming smartphones at him, while he  spewed his dubious cultural insight. The most memorable quote of the night? There were many, but "We were brought over here as slaves, and Lincoln turned us into unpaid interns or some shit" stands out.

In the end, West came across as the Trump of rap: unscripted, unhinged, probably broke — so perhaps it's fitting that Kanye's promised to run for president in 2020.