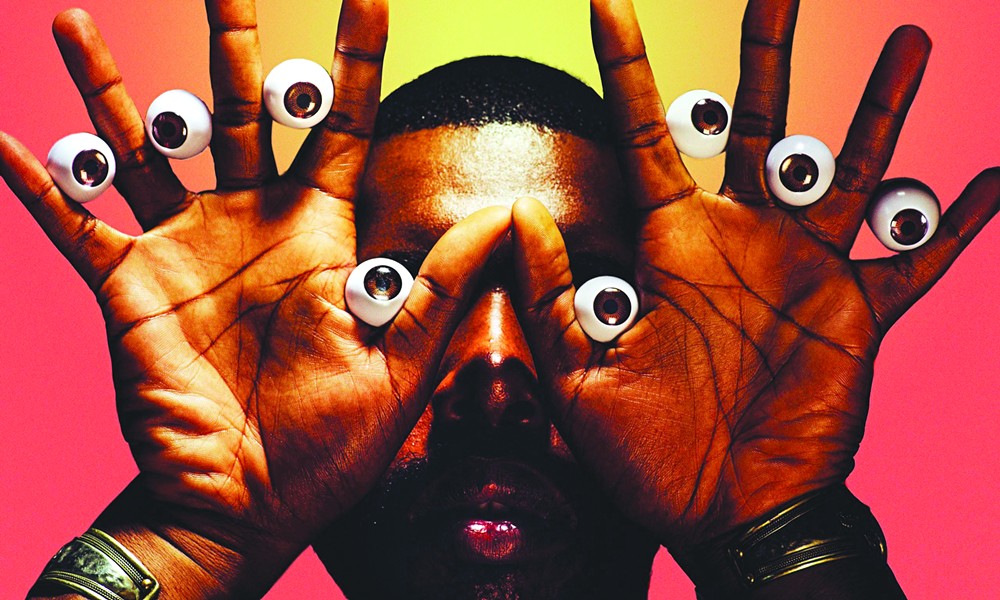 Flying Lotus
Flying Lotus, whom fans fondly refer to as “FlyLo,” is a Los Angeles-based music producer who has gained traction in recent years for his experimental, genre-blending sounds and use of instrumental hip-hop in electronic music. This Thursday and Friday, September 15 and 16, FlyLo will bring the best of his Brainfeeder label to the Fox Theater in Oakland, featuring standouts George Clinton, Shabazz Palaces, Thundercat, and Gaslamp Killer both evenings. A group with a widespread reputation for pushing traditional limits of electronic music, Brainfeeder creates music that sounds like an enigmatic mix of jazz, rap, hip-hop, and experimental electronic. Legend George Clinton is a seemingly unlikely addition to the lineup, but Flying Lotus’ music — and a lot of hip-hop production — is inescapably indebted to his legacy of experimental funk psychedelia. Catch FlyLo and his labelmates at the Fox for a sonic and visual adventure Thursday or Friday night. — Eda Yu
Thurs. and Fri., Sept. 15 and 16, 7 p.m. The Fox Theatre (1807 Telegraph Ave., Oakland). $45+. TheFoxOakland.com 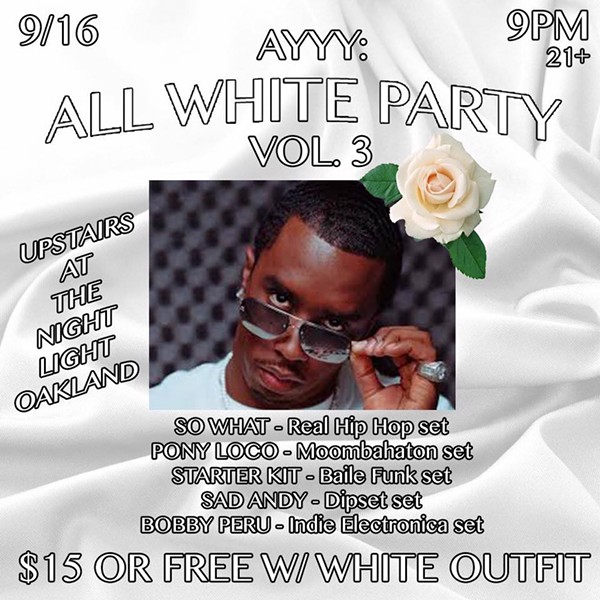 Diddy’s All White Party
Prepare to stunt in the upstairs venue of The Night Light on Friday night for the third edition of Trill Team 6’s Diddy’s All White Party, where the dress code is white from head to toe. Those dressed in the appropriate attire will be granted free entry, while those in pigmented clothing have to pay a cover of $15 — all the more reason to prepare your best all-white look now. Each of the DJs on the lineup has a themed set: So What is playing classic hip-hop; Pony Loco is playing moombahton; Starterkit is playing baile funk; Bobby Peru is playing indie electronica; and Sad Andy is playing exclusively Dipset — or so the flyer says. We’ll have to see if the DJs really stick to this order on Friday night or play the danceable, eclectic, multi-genre sets they’re known for. — Nastia Voynovskaya
Fri., Sept. 16, 9 p.m. The Night Light (322 Broadway Ave., Oakland). $15 or free with all-white outfit. TheNightLightOakland.com

Xuxa Santamaria
Although the collaborative sound performances done by Xuxa Santamaria — Sofía Córdova and Mathew Kirkland — are not quite theater, they are definitely theatrical. On Friday, September 16, the duo will appear at the Richmond Art Center (2540 Barrett Ave.) for a performance in conjunction with Making Our Mark, a massive group show honoring intergenerational influence and legacy. The pair will perform Echoes of a Tumbling Throne (Odas Al Fin De Los Tiempos), a live musical and video production that projects audiences 1,000 years into the future. The score consists of music made with the guidance of tarot cards and covers of pop songs translated into Spanish and rewritten to fit the piece’s sci-fi narrative. Meanwhile, the video projections depict a kaleidoscopic prophecy of a colorful, queer future reality in which racial and gender hierarchies are examined, reimagined, and mutated. — Sarah Burke
Fri., September 16, 6–8 p.m. Free. RichmondArtCenter.org

Mannie Fresh
Cash Money Records taking over for the 99 and the 2000 are Juvenile’s famous words before the beat drop of his iconic hit, “Back That Azz Up,” and now-a-days, they seem prophetic. Cash Money Records — the brainchild of Birdman and Mannie Fresh — dominated the rap game in the Aughts, mostly notably launching the career of Lil Wayne, who is a key influence on Drake, Nicki Minaj, and many of today’s chart-topping artists. As one of its key producers, Fresh was an architect of Cash Money’s sound, producing countless hits for the likes of Juvenile, T.I., T-Pain, Wayne, and others. He comes to Oakland for a rare set with local legend Yukmouth (who is known as a solo artist and Luniz member) as his opener. The prolific and versatile DJ Neto of the partythrowing outfits Trill Team 6 and Sick Sad World and Thizz Markie of the popular San Francisco party Trap City open, as well. — N.V.
Sat., Sept. 17, 9 p.m. The New Parish (1743 San Pablo Ave., Oakland). $20. TheNewParish.com 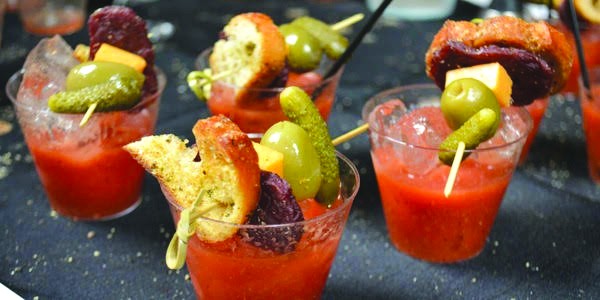 The Bloody Mary Festival
There aren’t many causes that’ll get the lazy East Bay boozehound to schlep across the bridge on a Sunday afternoon, but the prospect of tasting fifteen of the Bay Area’s tastiest and most innovative Bloody Marys might do the trick. That’s precisely what this Sunday’s San Francisco edition of the Bloody Mary Festival promises. Held at The Midway (900 Marin St. San Francisco), the annual cocktail competition will feature a strong East Bay contingent, including Plum Bar, Penrose, Nido, and 2014 winner FIVE Restaurant. Several local food companies will also be on hand offering samples to help soak up all that vodka. Tickets come with unlimited Bloody Mary tastings and are available via Eventbrite.com for $45 — or $80 for a VIP pass that includes lunch and early entrance. Sorry kids: This event is 21+ only. — Luke Tsai
Sun., September 18, 1–4 p.m., $45–$80, TheBloodyMaryFest.com

Oakland Week and the All Oakland Mini Film Festival
September 16–22 is officially Oakland Week at the New Parkway Theater (474 24th St.), everyone’s favorite, comfy indie cinema. In celebration, the theater is showing a packed schedule of movies either about Oakland, made by Oakland filmmakers, or starring Oakland-grown celebs — yes, Tom Hanks and many more. That means everything from Cheryl Dunye’s The Watermelon Woman to Ryan Coogler’s Fruitvale Station. But the highlight of the week will be the All Oakland Mini Film Festival, which takes place on Saturday, September 17. It will be a full day of short movies specifically highlighting Oakland culture. The day starts off at The New Parkway (12:30–2:30) with Love, Loss, and Local Landscape, a program featuring a presentation of footage from archivist Rick Prelinger’s acclaimed Lost Landscapes of Oakland; Pendarvis Harshaw’s TDK: The Dream Kontinues, about Oakland graffiti culture; and Beyond Recognition, a documentary about Oakland-born Ohlone activist Corinna Gould. In addition, from 1–5 p.m., both The New Parkway and the nearby Warehouse 416 (416 26th St.) will be screening a series of even shorter shorts. And the finale, which will take place at Classic Cars West (411 26th St.) from 7:30–10 p.m., will feature the unveiling of the short-cut of the anticipated Alice Street documentary, which digs into the legacy of Oakland’s Malonga Casquelord Center for the Arts — and the fight to preserve it; and the debut of Oakland Re:Construction a film by Chris Treggiari and Peter Foucault, the leading minds behind the current Oakland Museum of California exhibit Oakland, I want you to know… To top the whole thing off, the September 17 programming coincides with the Uptown gallery district’s monthly second Saturdays art walk — which means you can easily spend your entire day in Uptown celebrating Oakland creativity. — S.B.
Prices vary. TheNewParkway.com