September 09, 2016
comment
This week had its highs and lows. Namely, Beyonce had a birthday, which is obviously reason to celebrate. And Apple introduced really dumb cordless headphones that your child/pet will definitely choke on, which is  not great. You can't win 'em all. But here's how to make sure at least your weekend lands on the Beyonce side of the spectrum.

Bae, Kiki Pre-Pride Party at Venue
Swagger Like Us, the recurring queer hip-hop party, is celebrating Oakland Pride weekend at Venue with the second annual edition of its pre-Pride party, Bae, Kiki. Most people know what “bae” means. But, for those not in the know about “kiki,” it’s a term with origins in the LGBTQ community (particularly ballroom culture) for a good gossip sesh among friends. For Bae, Kiki, the Swagger Like Us crew has a lineup of live performers and DJs including headliners Mike Q, a DJ specializing in high-energy vogue mixes, and Baltimore rapper TT the Artist, whose girl power-centric rhymes are set to pulsing beats inspired by her hometown’s famous club scene. San Francisco rapper MicahTron (read all about her in our music section on page 38), Oakland rap group Femme Deadly Venoms, DJ Lady Ryan, and DavO are just a few of the other performers billed for this event, which features three dance floors and two stages. — Nastia Voynovskaya
Sept. 10, 9 p.m. Venue (420 14th St., Oakland). $20-$30. Facebook.com/VenueOak

Counterpoints: Stories and Data for Resisting Displacement
Approximately one year ago, the Anti-Eviction Mapping Project embarked on the endeavor to expand its research and data visualization of gentrification and displacement to Oakland, Fremont, and Alameda. On September 9, at 6 p.m., the volunteer-fueled collective will be presenting a year’s worth of data analysis and oral history highlighting the housing crisis in those areas. In the past year the Mapping Project has partnered with tenants advocacy organization Tenants Together to secure previously inaccessible eviction data with which it has assembled a twenty-page report that maps and analyzes eviction trends and even includes a list of Oakland’s newest serial evictors. The event, which will take place at East Side Arts Alliance (2277 International Blvd, Oakland), will also feature food, music, and “insurgent art.” — Sarah Burke
Sept. 9. Free. AntiEvictionMap.com

Caught At Ashby Stage
Caught, the new play by San Francisco’s promising young playwright Christopher Chen, begins with Chinese dissident artist Lin Bo, who created a jail cell in his New York City apartment and rented it out on Airbnb for $1 a night. Or did he? In Caught, it’s never clear exactly what’s “real” and what’s fiction. The play was inspired by the This American Life controversy in which monologist Mike Daisey presented his The Agony and the Ecstasy of Steve Jobs, which talks about the working conditions of Apple employees, as nonfiction — when it was actually greatly exaggerated. As New York Times’ Laura Collins-Hughes wrote after the play’s New York premier last month, Caught is “partly about American storytellers — artists and journalists alike — as tourists of suffering, exploiting the pain of people elsewhere for a more prominent spot in the cultural conversation.” Shotgun Players is performing Caught at Ashby Stage (1901 Ashby Ave., Berkeley) through September 25, followed by repertory performances. — S.B.
$5–$35. ShotgunPlayers.org

Get Low At the Starline Social Club
Social Life Productions recently won Best Party Planner for Your Social Life in this year’s Best of the East Bay issue. And its newest party, Get Low, is a safe space for queer and trans people of color (though allies are welcome) featuring DJs spinning hip-hop mixes, as well as sexy pole performances, live art, vendors, and a light show. This month’s edition is an Oakland Pride pre-party (the official Pride is Sunday, September 11) and features DJs Val G, Namaste Shawty, and Pam the Funkstress aka Purple Pam, an Oakland legend who became Prince’s official tour DJ in the months before his untimely passing. It’s the perfect way to kick off Pride weekend, but if you want more ideas, check “Your Pride Week Guide to Queer Turn-Ups in the East Bay” in last week’s Queer & Trans Issue. — N.V.
Sept. 9, 10 p.m. Starline Social Club (2236 Martin Luther King Jr. Way, Oakland). $15. StarlineSocialClub.com 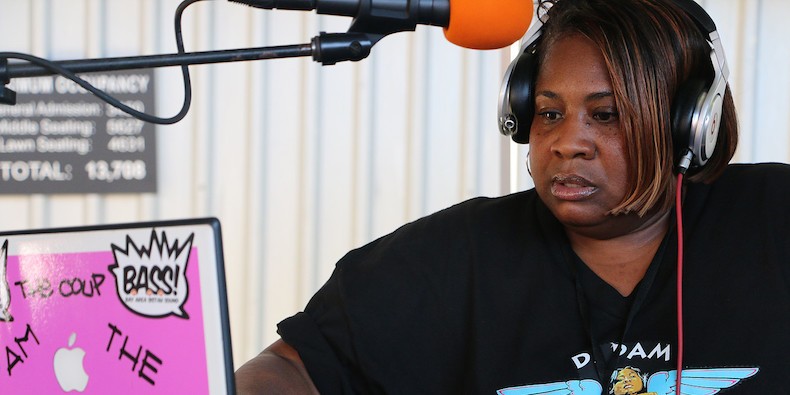 Making Your Mark
In celebration of its eightieth anniversary, the Richmond Art Center (2540 Barrett Ave.) will present Making Our Mark, a show that highlights living artists who have made important contributions to its program throughout time. In a nod to the center's mission of educating and nurturing the Bay Area arts community, each of the fourteen invited artists was asked to invite a younger artist — someone who they've mentored or whose work they feel deserves attention. The result is a fascinating collection of artists that allows the viewer to trace intergenerational influence. Some of the pairs include large-format landscape photographer Richard Misrach alongside postcolonial video, installation, and performance artist Sofia Cordova; and famous former UC Davis professor William T. Wiley alongside found-object installation artist Mary Hull Webster. A wealth of programming will accompany the epic show, which runs from September 13 through November 12 with an opening reception this Saturday, September 10, from 5–7 p.m. —S.B.
Free. RichmondArtCenter.org