LoBot Gallery, Mainstay of Oakland’s DIY Art and Music Scenes, to Shutter at End of Month

The space is just the latest underground art spot to fall victim to rising real estate costs in the East Bay. 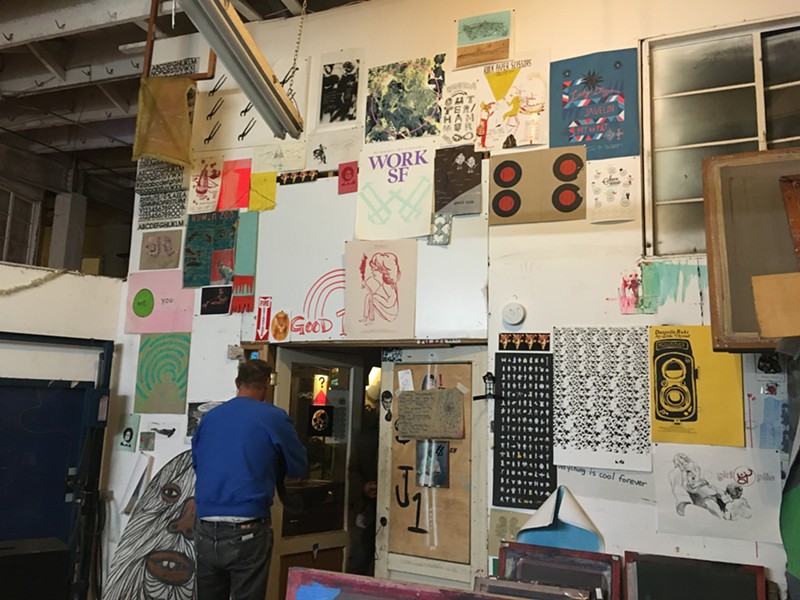 On a recent Tuesday evening, a group of seven artists sat in the community kitchen of LoBot Gallery, the West Oakland warehouse that’s home to a dynamic music and art venue and studio complex. They solemnly clutched their mugs of tea as they discussed the fate of the space, where a changing group of artists and musicians have worked over the past thirteen years.

The co-owner of the 1800 Campbell Street property, Katie Harmon, issued the tenants a notice to vacate the premises by July 31. This came after steadily increasing their rent by more than 90 percent over the past two years, according to a statement on LoBot’s Facebook page.

Lease-holder Zeph Fishlyn says Harmon refuses to negotiate a long-term lease, or continue to rent on a month-to-month basis, leaving LoBot with no choice but to abandon its current location — in turn pushing out the loose collective of nearly thirty artists who currently work out of the space.

LoBot’s displacement comes at a time when rising rents are pushing out arts organizations and nonprofits across the Bay Area. Real-estate brokers are advertising West Oakland as the next frontier of Silicon Valley, because of its proximity to San Francisco, and landlords stand to make significant profits in the current market.

But arts advocates say that creative centers such as LoBot are what made Oakland attractive to newcomers in the first place.

LoBot’s exodus comes at a time of similar closures of other art spaces and music venues. Rock Paper Scissors and Ghost Town Gallery, which similarly championed DIY, underground culture, also shuttered within the past year for related reasons (although Rock Paper Scissors still operates as a collective without a brick-and-mortar location).

Since 2003, LoBot has hosted free or cheap art shows, concerts, and other cultural happenings that catered to niche subcultures and marginalized communities. The tenants of its studio spaces are visual artists and musicians. Their combined rent pays for a large, mixed-use event space. This venue has hosted a wide variety of unusual events, such as a spa day for and by sex workers, queer film screenings, and the punk fanzine Maximum Rocknroll’s annual festival, Still Not Quiet on the Western Front. And LoBot’s facilities are vital to low-income artists, especially at a time when space to create art in the Bay Area is expensive and scarce.

Mya Byrne, a multi-instrumentalist with a practice space at LoBot, fondly recalled playing a show there with a lineup of mostly trans musicians. She explained that there are very few places in the Bay Area and across the country where events like that are possible. “As a trans woman, I feel safe being here. I feel like I’m completely supported. As a woman in music, it’s very difficult to find any space that will affirm that part of you.”

The artists interviewed at LoBot agreed that, while at first the space mostly catered to white creative types, over the past few years the collective has diversified and turned its focus to hosting events that aim to be inclusive to LGBTQ people and people of color.

“We have to be realistic about the fact that white artists have been part of the displacement of longtime, Black residents here [in West Oakland],” said Fishlyn, who was similarly displaced from Million Fishes Art Collective in San Francisco’s Mission District before joining LoBot two years ago. “We’re definitely part of that whole ecosystem.

“But what’s coming in behind us is much worse.”

Raphael Villet, a visual artist and curator working out of LoBot, said that the space is vital to the community because, since the studio spaces pay for the venue, LoBot is able to host experimental events and performances that may not appeal to the masses — and keep admission prices affordable.

“The space is really important because it provides an opportunity for people to use the space to make art, to have performances, or to gather outside the realms of capitalism,” he said.

Faced with the notice to vacate earlier this year, the artists at LoBot sought assistance from the Oakland Community Land Trust, a nonprofit that purchases property with the purpose of renting it to low-income residents with a goal to mitigate the effects of displacement. But if a landlord is unwilling to participate, the Land Trust can’t do anything to help.

Harmon did not return the Express’ emails or phone calls for this report.

The LoBot artists also reached out to city of Oakland officials, including Kelley Kahn of the Economic Development Department. Kahn was part of Mayor Libby Schaaf’s Artist Workspace and Housing Task Force, which created a set of recommendations in January that the city is currently pursuing to prevent further artist displacement.

Kahn said that she hopes the city can provide Oakland’s creative class with resources to avoid future artists’ displacement and struggles. However, in the case of LoBot, Kahn said the city’s hands are tied. “Situations like this make me feel the limitations of government,” she explained. “A city government doesn't have the power to make a private property owner do the right thing.”