Brouhaha: QTPOC Comedy Extravaganza
Last year, Oakland’s Brouhaha became the first all-trans woman of color comedy show in the country, and it was a huge hit. It started with comedians and activists Lexi Adsit and Luna Merbruja, who gathered together a group of women who had mostly never performed on stage before and coached them through a comedy boot camp that translated their experiences into hilarious stand-up routines. When it premiered last summer, all the shows completely sold out. On May 20, Brouhaha is back as the opening night event for the National Queer Arts Festival. And this time, they have a headliner: Celebrated trans activist CeCe McDonald will be taking the stage to lay down some social justice comedy. Plus, Brouhaha’s TWOC storytelling crew will be joining its comics for a “comedy mega-show” that will also feature spoken word. The show will be held at the Oakland Metro Opera House (522 2nd St., Oakland) at both 7 p.m. and 10 p.m. As expected, the early show is already sold out, but as of publishing there were still tickets available to the late show. That one will likely be more fun, anyway. — Sarah Burke
Fri., May 20, 7 p.m. $12–$25. PeacockRebellion.org

N.E.W. Oakland
While a lot of people have been using the term “New Oakland” to talk about the influx of wealthier residents in recent years, N.E.W. Oakland stands for something else entirely. I got the north, got the east, got the west with me, rhymed Mistah F.A.B. on his hyphy-era hit of the same name, with a hook that promoted neighborhood unity and Town pride. In a similar spirit of camaraderie, several rappers who are also Oakland natives have come together for FreeSpirit Presents: N.E.W. Oakland. FreeSpirit is the music collective and lifestyle brand of West Oakland rappers Beejus and Oops, the latter of whom is performing at the show. Legendvry, a thoughtful lyricist with a commanding voice, just released his uptempo new single, “Easy,” and has hinted on Twitter that he’ll be performing unheard material from his forthcoming full-length project, Præy for the Weæk, at the show. Conscious freestyle wiz R.I.C.O. G. and Harris the KnowItAll are also performing — and the show promises two special guests, too. Fellow rapper J. Lately will host and Fabes will be behind the decks.— N.V.
Fri., May 20, 9 p.m. $6, $10. LegionnaireSaloon.com

B.o.B.
If the Drake and Meek Mill beef of 2015 taught us anything, it’s that tweeting outlandish and unbacked statements is a great way to get attention and — if played smartly — boost sales figures. Whether you’re onboard with that philosophy or think it signals the decline of our civilization, you gotta admit that it does work. While B.o.B. faded from the spotlight in recent years despite having having won several Grammys and BET Awards, he reinvigorated his popularity by tweeting the preposterous theory that the Earth is flat, and further elaborating in his single, “Flatline.” While this theory was debunked hundreds of years ago, physicist Niel Degrasse Tyson indulged B.o.B. and recruited his nephew, Philadelphia rapper TYSON, to refute his claims with a “Back to Back”-inspired diss track. “Flat to Fact” is about how the Earth is indeed round and that this has been proven for ages. B.o.B., who previously marketed himself as a clean-cut pop star, has now become the favorite R&B singer of conspiracy theorists everywhere. Does his new music live up to the Twitter hype, though? See for yourself at his show at The New Parish on May 20.— N.V.
Fri., May 20, 8 p.m. $22. TheNewParish.com

‘Fearless’ Album Release Party
San Francisco rapper Babii Cris is a certified Triple Threat — as the name of her first album asserts. In addition to her skills on the mic, the young artist is also a prolific producer and audio engineer. On Triple Threat, she handled all aspects of the project solo. But for her new release, Fearless, she teamed up with Japanese producer Junknuts, who created jazzy, effervescent beats with a Nineties boom-bap flavor for the project. Cris and Junknuts found each other on SoundCloud and executed a cohesive vision despite the cultural and geographic barriers. Fearless also showcases Cris’ multifaceted vocal abilities and lyrical breadth. Throughout, she rhymes about everything from relationships to social justice, showcasing her arsenal of versatile flows. Celebrate the release of Fearless with Babii Cris at Layer Studios on May 21, where she will be performing with a live band.— N.V.
Sat., May 21, 7 p.m. $10, $15. BabiiCris.com 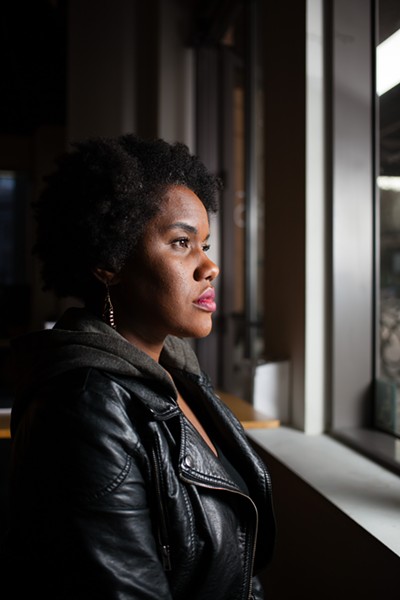 Alternate Histories
You’re likely aware that the Bay Area is experiencing an extreme affordability crisis. Within the arts community, that has meant that many crucial alternative-art spaces that once thrived in Oakland are now at risk. On Saturday, May 21, Pro Arts Gallery (150 Frank H Ogawa Plaza, Oakland) will be hosting a panel called Alternative Histories, in which longtime participants of the alternative Bay Area art scene will discuss both the past and future of these important spaces. The panel will feature Anyka Barber, Oakland native, director of Betti Ono gallery, and founder of the Oakland Creative Neighborhoods Coalition; Nicholas Wylie, artist, organizer and Development Director at Southern Exposure gallery in San Francisco; Renny Pritkin, chief curator at The Contemporary Jewish Museum; and Sarah Lockhart, who founded the arts nonprofit 21 Grand (2000–2010), which was one of the first members of Oakland Art Murmur.— S.B.
Sat., May 21, 3-5 p.m. Free. ProArtsGallery.com

Island City Waterways
History can be boring, but the folks at Rhythmix Cultural Works in Alameda are determined to make it anything but. This weekend, they will premier Island City Waterways, a multi-disciplinary, multi-part free public art performance that will explore the rich history of Alameda’s various waterways. The performance takes the form of a half-mile walking tour that has four stops. It starts at the Fruitvale Bridge where artist Ginny Parsons will lead art-making workshops while an East Bay Parks specialist teaches the crowd about falcons. At the next spot, muralist Mark Lewis Wagner will create large scale drawings of Alameda immigrants that will turn into a backdrop for a dance performance. Then its off to the Rhythmix Cultural Works theater for an interactive installation and historical storytelling session, followed by a massive music and dance finale at the last destination. It’s totally free, but advanced tickets have all been reserved for the total six performances planned for Saturday May 21 and Sunday May 22. Remaining slots will be given to walk-ups on the day of the event at a first come first serve basis.— S.B.
Fri., May 20, 10:30 a.m.-4 p.m., Sat., May 21, 10:30 a.m.-4 p.m. and Sun., May 22, 10:30 a.m.-4 p.m. Free. IslandCityWaterways.org