May 13, 2016
comment
This weekend is Bay to Breakers, which means masses of drunk people in costumes will be jogging across San Francisco. That's cool. But if you'd rather avoid that mess, here's five other events worth attending this weekend:

Altered State: Ask an Expert
As part of its new groundbreaking marijuana exhibit, Altered State, the Oakland Museum of California (1000 Oak St.) is hosting a Q-and-A session with Dr. Robert Martin of the Association of Commercial Cannabis Laboratories. Altered State highlights the history of weed in California and its various cultural strains (har har). It’s a pressing topic, considering that recreational-marijuana legalization will be on the state ballot this November. To further inform the debate, OMCA is holding monthly “Ask an Expert” sessions during its Friday Nights @ OMCA block parties. (Pro tip: During that time, admission is half price for adults and free for kids.) These will feature experts on cannabis law, health, economics, and politics. The next one, featuring Martin, will take place on May 13 from 6–8 p.m. and will be a prime opportunity to ask policy-related questions. — Sarah Burke
Fri., May 13, 6-8 p.m. $0–$7.50. MuseumCA.org

Techie Blood
Since releasing its demo tape Millions of Dead Techies last year on a mysterious YouTube channel called Guy Fieri Official (which has no relation to the bleach-blond chef, by the way), East Bay hardcore band Techie Blood has been exceedingly prolific. For its most recent, untitled tape, which came out in April, the band further explores the discordant noise and electronic elements that set its first work apart. Feedback functions as an instrument in its own right, cutting through rumbling, rhythmic guitar riffs with abrasive, screeching pitches. The band’s work posits gentrification as a sort of apocalypse, and its music is intentionally bleak: “The songs are dry, the vocals like a death rattle, and it is topped by bizarre synth interludes that make you feel more empty than you ever will again,” according to the text on Guy Fieri Official. In contrast, Grids, the tape Techie Blood dropped in January, is a dreamy, ambient electronic piece with rife with retro-sounding synths that conjure images of the space-age visions of the future. The new band has proven to be versatile and iconoclastic so far, and they’re definitely one to watch this year.— Nastia Voynovskaya
Fri., May 13, 7:30 p.m. $6. HoneyHiveCollective.com

Serpentine
If a party flier has Jasmine Infiniti and 8ULENTINA’s names on it, you can bet it will include a selection of next-level sounds that will get a crowd moving yet are a far cry from your typical throwback-oriented dance party. The Oakland DJs opt for electronic music subgenres with futuristic aesthetics, high BPMs, and international influences — skillfully mixing disparate subgenres in the process. While Jasmine Infiniti often opts for glitchy house, 8ULENTINA often combines elements of traditional Middle Eastern percussion and vocals with bass-driven club beats. The duo teams up for Serpentine, a dance party at the radical community center Qilombo also featuring Chicago DJ Ariel Zitana, Drusilla, and Foozool — another excellent DJ who is 8ULENTINA’s collaborator on the popular monthly party, Club Chai, at Alena Studios. — N. V.
Fri., May 13, 9 p.m.

MATRIX 260 / Otobong Nkanga
For the first installment of its MATRIX series since reopening, the Berkeley Art Museum and Pacific Film Archive is presenting two performances by Otobong Nkanga. The Nigerian-born, Antwerp-based multimedia artist often makes work that examines the value of natural resources and their relationship to place. Her work also probes the material, natural, and sociopolitical history of Nigeria. Nkanga’s final performance for BAMPFA will be Contained Measures of a Kolanut, on May 14, in the Tropical House at the UC Botanical Garden in Berkeley (200 Centennial Drive). At the performance, Nkanga will lay out tables with diagrams, maps, and images that present the cultural significance and ritual use of the kola nut, a nut that comes from the kola tree indigenous to tropical African rainforests and that is a source of caffeine. From 1–5 p.m., Nkanga will invite visitors to sit with her at the table to engage in conversation and partake in her version of a kola nut ceremony. — S.B.
Sat., May 14, 1-5 p.m. $2-$12. BAMPFA.org 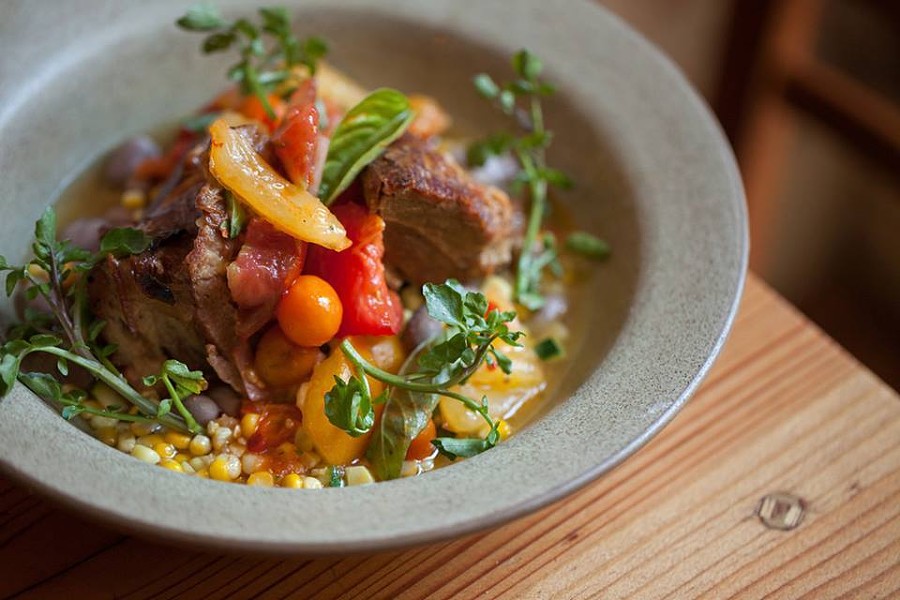 Sunday Suppers East Bay: Youth UpRising @ Pizzaiolo
For the past two years, this every-other-month philanthropic Sunday Suppers series organized by Oakland restaurateur Charlie Hallowell (Pizzaiolo, Penrose) has operated on a simple principle: Every time a prominent East Bay restaurant donates a single night’s worth of sales (often on a night when it would normally be closed anyway), it can raise somewhere in the ballpark of $10,000 for a worthy local nonprofit. That tradition continues this week at Pizzaiolo (5008 Telegraph Ave., Oakland), where the $60–$100 sliding-scale prix-fixe menu will buy you a family-style feast featuring beef short ribs with fava beans and olive oil cake with strawberries and cream. Wine is included in the price of the meal. Proceeds from this month’s Sunday Supper will benefit Youth UpRising, an East Oakland-based youth leadership program. Tickets are available via Brown Paper Tickets. — Luke Tsai
Sun., May 15, 5:30-10 p.m. $60-$100. SundaySuppersEastBay.com