The Frisco 5’s movement is resonating with communities dealing with police brutality, high costs of living, and cultural erasure across the Bay Area.

After delivering an impassioned speech on the steps of San Francisco City Hall yesterday following a day of protest, San Francisco rapper Equipto left the scene in a wheelchair looking hopeful despite his visibly famished appearance. The musician and educator was on the thirteenth day of his ongoing hunger strike against police brutality, mass incarceration, and gentrification — issues disproportionately affecting people of color, who are being displaced from the Bay Area’s urban centers at alarming rates.
According to a 2013 report issued by the San Francisco Controller’s Office, 56 percent of inmates in San Francisco jails are Black although only six percent of the city’s population is Black. In light of such alarming statistics, Equipto decided to take action.


Equipto is a well-known underground rapper who’s been at the center of San Francisco’s conscious hip-hop scene since the 1990s. And now, he’s using his considerable platform — and risking his physical health — to galvanize Bay Area residents to lobby local politicians to address issues of systemic inequality. Equipto’s mother, Maria Cristina Gutierrez, the executive director of Compañeros del Barrio preschool; rapper Sellassie; educator and poet Ike Pinkston; and activist and candidate for San Francisco District 9 Supervisor Edwin Lindo have joined Equipto in the hunger strike, and together call themselves the Frisco 5. The Frisco 5 have been camping out in front of the police station on the corner of 17th and Valencia Streets for the past two weeks, and yesterday, May 3, they led a march from their camp to San Francisco City Hall to spread their message and present their demands to Mayor Ed Lee. The demands call for the immediate firing or resignation of San Francisco Police Chief Greg Suhr, whom the protestors say has enabled a culture of racist law enforcement practices, resulting in the deaths of several mentally ill or unarmed individuals at the hands of SFPD in recent years. The other two key goals of the protest are to mandate independent investigations of officer-involved shootings, and to indict the officers involved in recent San Francisco police killings, particularly the deaths of Mario Woods and Alex Nieto.

At around noon on Tuesday, hundreds of protestors of various ages and ethnic backgrounds gathered at 17th and Valencia — many of them holding signs displaying words of solidarity with the families of the recent police brutality victims, as well as demands for Suhr’s resignation. The Frisco 5, weakened from nearly two weeks without food, sat in wheelchairs pushed along by volunteer doctors from the activist coalition White Coats 4 Black Lives. Around two-dozen protestors linked arms around them to create a protective barrier while the group marched through traffic down Mission Street and, eventually, Market Street towards the steps of City Hall. In a brief conversation before the march, Sellassie — who recently released the heated protest song “Cops Keep Firing” — told me that the Frisco 5 intends to continue the strike until they “get the city back.”


When the march arrived at City Hall, some protestors entered the building to voice concerns at the Board of Supervisor’s meeting while others gathered outside of it. Volunteers pushed the wheelchair-bound Frisco 5 towards the mayor’s office. News spread through the crowd that Mayor Lee was at a meeting in Bayview. Activists waited for hours, making speeches and singing protest songs, but the mayor never showed up, and the march began to dissipate around 5 p.m.

“Please continue showing support, this is just the beginning,” said Equipto in his concluding remarks on the City Hall steps as the Frisco 5 prepared to head back to the Mission district camp. He continued, quoting the Bay Area Minister of the Nation of Islam: “Like Minister Christopher Muhammad said, ‘It’s a marathon — it’s not a sprint.’ So let’s make sure we keep staying around for the long haul and keep showing support.” 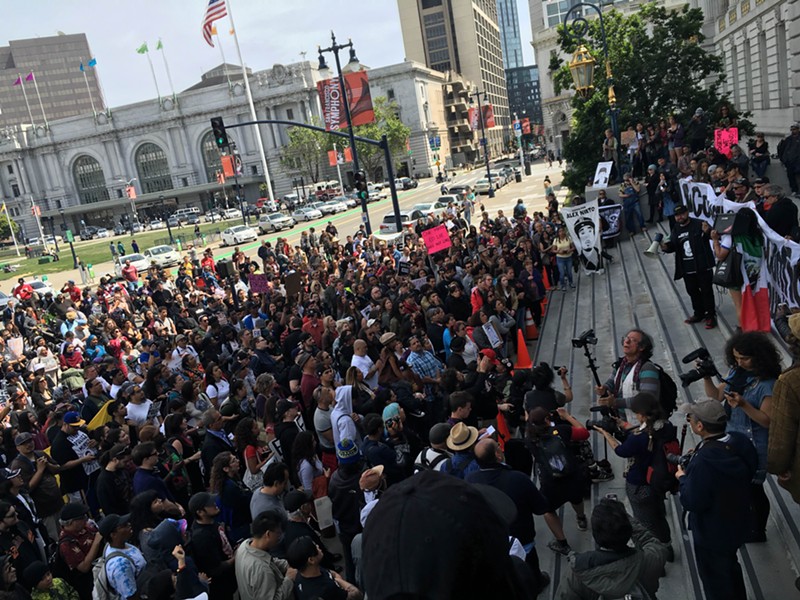 In addition to the rappers among the Frisco 5, several prominent figures from music scenes on both sides of the Bay were involved in the rally. Raw-G, an Oakland rapper by way of Mexico, was helping to direct the crowd throughout the march. “This is a global issue. This is not just one cop killing one person,” she said in an interview during the protest. “We’re getting killed all over the world, and being targeted because we’re Black and brown. I’m here to offer my support to Equipto and Sellassie, whatever I can do. … As artists, we have the power to create a huge message and a big impact.”

Art Sato, Equipto’s father and the host of KPFA’s Latin jazz program, In Your Ear, spoke to the crowd about the need for Asian American solidarity with Black Lives Matter (Sato is Japanese-American, and Equipto is of Colombian and Japanese descent).

Naima Shalhoub, a Lebanese-American Oakland jazz singer whose last album included contributions from women serving time in San Francisco Jail, was also among the protestors linking arms to protect the Frisco 5 from traffic and police during the march.

While they were ultimately unable to meet with Mayor Lee, the Frisco 5 deemed the day of action a success. On his Instagram today, Equipto posted another call to action to shut down the San Francisco Police Commission Meeting at 5:30 p.m. in room 400 of San Francisco City Hall, adding that Sellassie has fallen ill and is in the hospital. No further details have been announced, but stay tuned for updates.