March 04, 2016
comment
I know, it's tempting to stay in on this rainy weekend and listen to the brand new Kendrick Lamar album on repeat. But Kendrick's music isn't going anywhere — and neither is the rain, according to our local meteorologists — so you might as well make the most of the weekend while all of these exciting events are happening. See below: 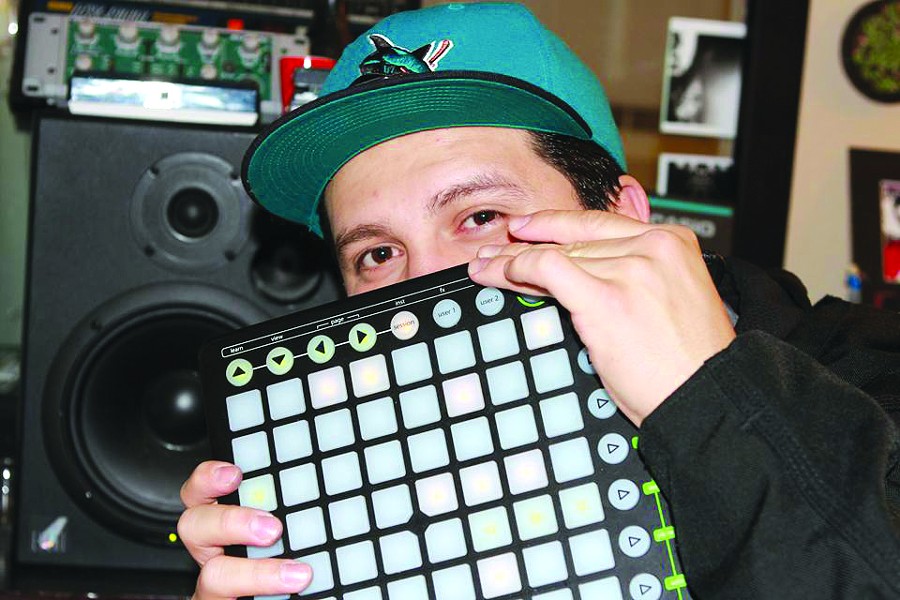 Turbo Sonidero Futuristico
San Jose DJ Turbo Sonidero Futuristico throws the recurring party Sonido Clash, which is a showcase for electronic music with Latin roots in the South Bay. He also has performed at many East Bay dance parties over the years thanks to his association with the Oakland DJ collective Trill Team 6. Turbo specializes in haunting and surreal cumbia remixes that take the upbeat South American folk genre and transform it with disorienting, hypnotic electronic effects and occasional R&B and hip-hop samples. While most cumbia is bouncy and jovial, Turbo’s productions retain the genre’s danceable feel while inserting dark and unexpected twists. He performs in Oakland at Lounge 3411 in the Laurel District at the free party Well Nourished Rhythms alongside San Francisco disco producer Jessica Hagen.— Nastia Voynovskaya
Fri., March 4, 9 p.m. Free. Facebook.com/WellNourishedRhythms 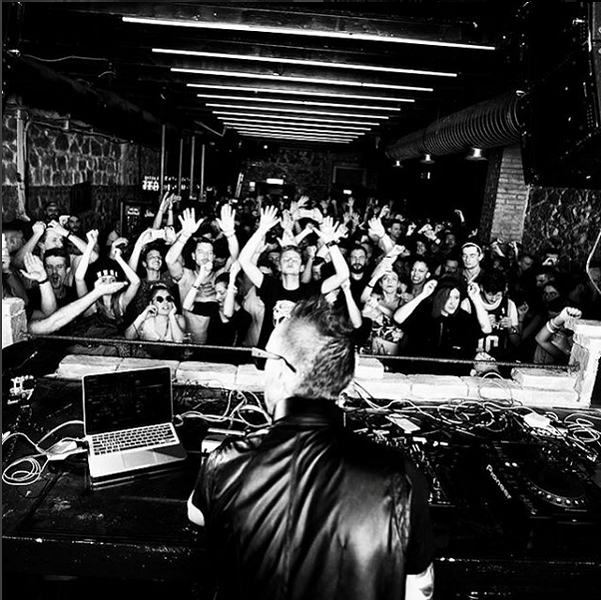 Lights Down Low 10 Year Anniversary Party
On March 4, DJs Richie Panic and Corey Sizemore will celebrate ten years of debauchery with a special, anniversary edition of their recurring dance party, Lights Down Low, at the Mezzanine in San Francisco. Longtime pillars of the city’s club scene, the pair started LDL as a small function at the now-defunct Tenderloin club 222 Hyde (which the San Francisco Bay Guardian once nicknamed a “rave cave”). Since then, it has expanded into an influential West Coast brand. In addition to booking internationally recognized electronic music artists, such as Simian Mobile Disco and Disclosure, Panic and Sizemore have thrown editions of the event at various clubs in Los Angeles and at the hugely popular festivals Coachella and South by Southwest. The upcoming anniversary party will feature deep house purveyors Skream and Jamie Jones. If you miss that show, there will be another ten-year anniversary celebration on April 20 at Public Works in San Francisco featuring 2ManyDJs from Belgium.— N.V.
Fri., March 4, 10 p.m. $10-$30. MezzanineSF.com 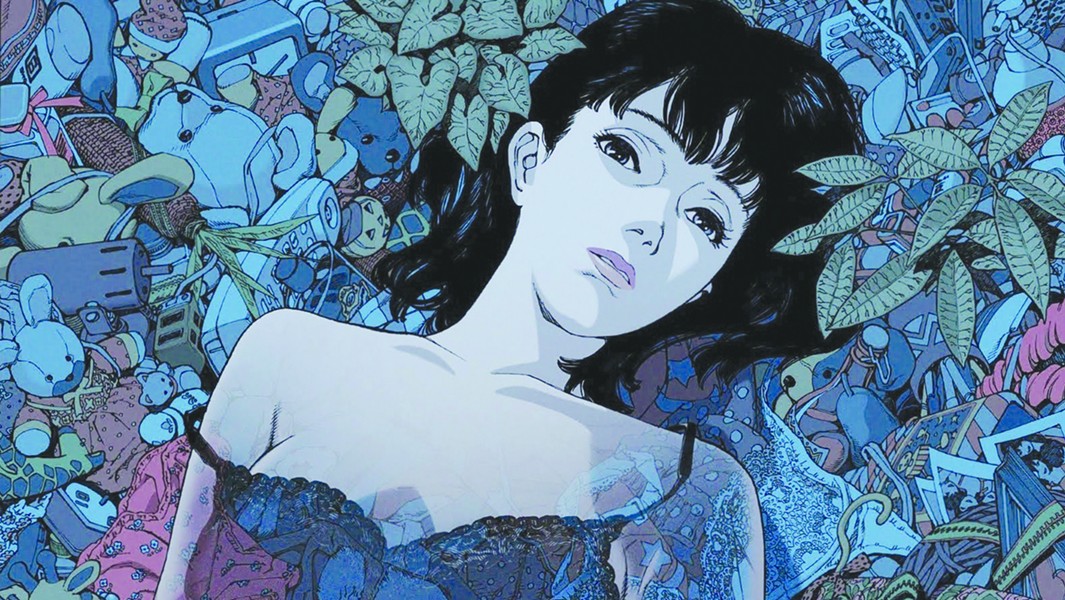 GLAS Animation Festival
The first annual GLAS Animation Festival, which aims to highlight innovation in animation and showcase new voices at the forefront of the field, will take place March 3–6 in Berkeley. The packed program ranges from new, experimental works to snapshots of influential moments in the history of animation. Opening night will feature Perfect Blue, a 1997 feature-length psychological thriller by acclaimed Japanese director Satoshi Kon and a series of shorts curated by Undervolt & Co., an experimental video art label. Some schedule highlights from the rest of the weekend include thoughtful compilations, such as Paranoia and Technology in Contemporary Animation and Experimental CGI, and a screening of the stop-motion movie Coraline followed by a Q&A with its internationally-famous animator Henry Selick. Events and screenings will take place at Shattuck Cinemas, the David Brower Center, and the Berkeley Art Center. Individual tickets and festival passes are available.— Sarah Burke
Through March 6. $12­–$200. GlasAnimation.com 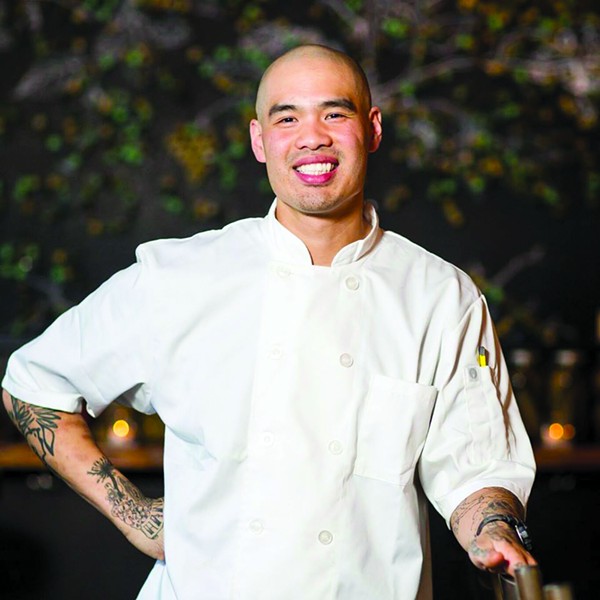 ĂN By Chef Tu David Phu
If you’re in San Francisco this Saturday and want to check out a pop-up with East Bay roots, stop by the Naked Kitchen (945 Valencia St., San Francisco) event space in the Mission district. Tu David Phu, the chef at Berkeley’s Gather, will kick off an ongoing dinner series exploring his Vietnamese heritage — or, as Phu puts it, his “interpretation of Vietnamese Cuisine as an Asian American in California.” Naturally, diners can expect more of an Asian focus than they would typically find at Gather, but the menu — with dishes such as pork jowl kho smoked in hay and rosemary, and Earl Grey annin tofu — makes no pretense of being strictly traditional. The meal will be BYOB, and tickets are available via Eventbrite.com.— Luke Tsai
Sat., March 5. $90.67–$106.49. ChefTuDavidPhu.com

KunstCapades Episode 32
Perhaps it’s a podcast, or a variety show, or a piece of performance art — or all three. Self-described as a “tropical radio art experience,” KunstCapades is hosted by artists Josh Pieper and Tim Sullivan along with their bartender Marv (Robyn Carliss). And although the bi-monthly production is typically recorded in San Francisco, it’s currently in residence at Aggregate Space (801 West Grand Ave., Oakland), where its hosts have transformed the gallery into a combination tiki bar and alpine get away. On March 5, at 4 p.m., Pieper and Sullivan will host a live recording of KunstCapades Episode 32 in the space, complete with tropical cocktails. The guests will be Sarah Hotchkiss, KQED visual arts editor and one of the artists behind Stairwell’s, a walking tour series exploring stairwells around the Bay Area; and Natalia Mount, the recently-appointed executive director of Pro Arts Gallery in downtown Oakland.— Sarah Burke
Sat., March 5, 4 p.m. Free. AggregateSpaceGallery.org 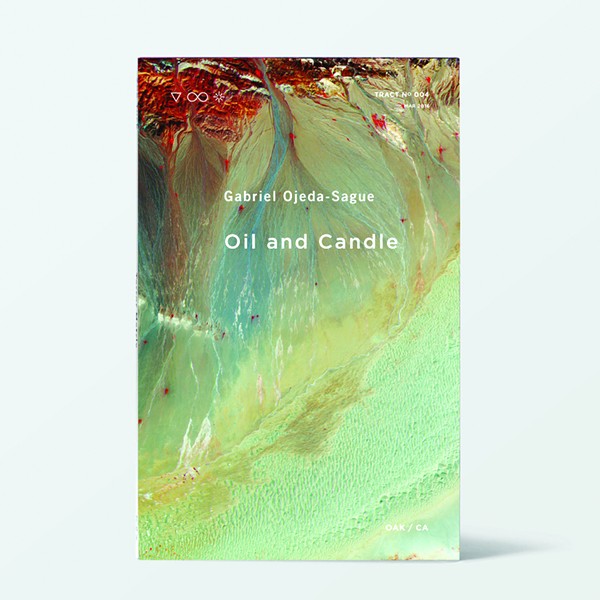 Oil and Candle by Gabriel Ojeda-Sague
This Saturday, the Oakland small press Timeless, Infinite Light will be celebrating the release of its latest publication, Oil and Candle. The author, Gabriel Ojeda-Sague, is a Latino, queer poet living in Philadelphia, Pennsylvania, and the first winner of Timeless’ TRACT series, for which the press solicits submissions of cross-genre and experimental literary work to be sifted through by guest judges. The winning work is described as a piece that “traces imagined rituals, failed rituals, and magical objects of Santería in confronting issues of race, warfare, and the precarity of Latino lives.” The release party will be at Diesel, a Bookstore (5433 College Ave., Oakland) on March 5 at 7 p.m. In addition to Ojeda-Sague, readers will include Cheena Marie Lo, author of the forthcoming A Series of Un/Natural/Disasters (Commune Editions) and co-editor of the literary journal HOLD, and Hugo García Manríquez, a Mexico-born bilingual poet who most recently released Two Poems (Hooke Press). The night will also feature a performance by Lukaza Branfman-Verissimo, whose social practice artwork often involves collecting stories related to cultural identity.— S.B.
Sat., March 5, 6:30-8:30 p.m. Free. TimelessInfiniteLight.com

Guide Me – Paradise
Courtney Sennish’s recent artwork defamiliarizes the urban landscape through sculptural abstraction. Guide Me – Paradise, her current show at Johansson Projects (2300 Telegraph Ave., Oakland) transforms the gallery into a deconstructed sidewalk scene. A slanted slab of concrete painted with the shadow of an invisible tree sits next to what looks like a piece of curb, half painted yellow — like a loading zone. The same yellow appears on an upright slab, patterned with protrusions like the ones meant to guide vision-impaired pedestrians. Isolated from their usual context, the day-to-day design elements start to look like odd monuments memorializing a metropolis. Sennish is interested in the ways that these built environments affect our collective understanding of nature and hopes to question how they direct our interaction with and perception of the world around us.
— S.B.
Through March 19. Free. JohanssonProjects.com 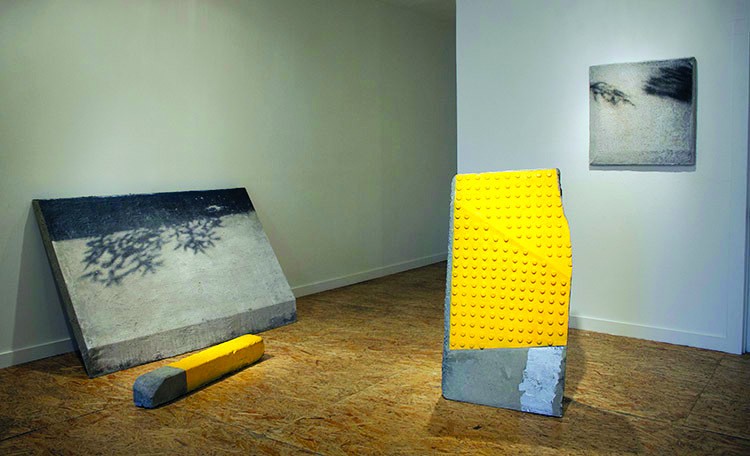