February 26, 2016
comment
Peel yourself away from politics for a moment and look outside. Not only is it sunny, it's the weekend! Here's a list of ways to enjoy yourself over the next few days. Then you can go back to shaking your fist at the TV.

Teklife’s DJ Spinn and DJ Earl
Chicago footwork is a fast-paced, percussive style of house music with an accompanying DIY street dancing culture. And while the footwork scene in the Windy City is pretty underground, it has many appreciators in the Bay Area, where turfing occupies a similar niche in the hip-hop and DJ scenes. So the untimely death of DJ Rashad, one of footwork’s pioneers, in 2014 was deeply felt in Oakland’s music community, with many artists and DJs expressing their condolences for the legendary producer on social media. Footwork fans in the Bay Area can rejoice, however, as DJ Spinn and DJ Earl of Rashad’s original Teklife crew are coming to Oakland to play at Brix on February 27. Sela Oner, a Vallejo producer who considers footwork a major influence, is also on the bill, alongside up-and-coming Bay Area DJs Namaste Shawty, Drea Faux Real, and Shruggs.— Nastia Voynovskaya
Sat., Feb. 27, 9 p.m. $12-$15.

Dookie: A benefit for 924 Gilman DAY PARTY
924 Gilman is a longstanding, all-ages punk venue in Berkeley where many legendary bands — such as Green Day — got their start. Since 1986, the venue has served as a talent incubator for up-and-coming punk and hardcore acts, as well as a hospitable place for underground touring bands to perform. Currently, as rents rise astronomically in the Bay Area, many cultural hubs are pursuing strategies to secure their longevity amid the competitive real estate market. The Gilman is currently in the middle of a fundraising campaign that organizers hope will gather enough money over the next three or four years to secure a permanent location. To help the cause, The Night Light, a bar with punk roots in Oakland’s Jack London district, is hosting Dookie: A Benefit for 924 Gilman Day Party on February 28. The show, which features Bill Collins, Cinder Block, and DJ Jesse Luscious, will benefit this endeavor, as well as the Gilman’s efforts to lower door prices and expand its outreach to underserved populations.— N.V.
Sun., Feb. 28, 4 p.m. $25. TheNightLightOakland.com 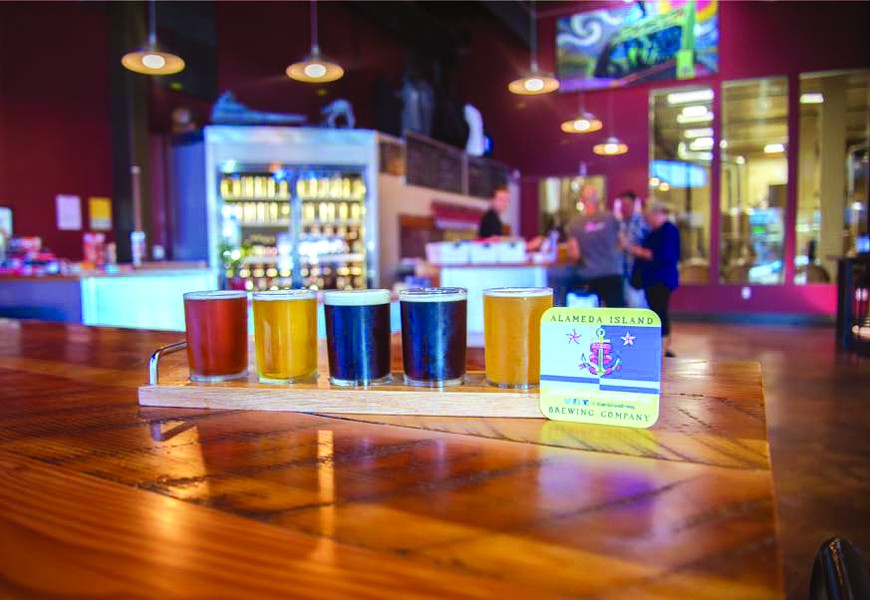 Alameda Island Brewing Company One-Year Anniversary
A member in good standing of Alameda’s burgeoning craft booze boom, the Alameda Island Brewing Company (1716 Park St.) will celebrate its one-year anniversary on Saturday with an all-day bash that will feature brewery tours led by head brewer Matthew Fox, a continuous lineup of live music, and Oakland-made Salt Point pretzels to snack on (because who doesn’t like a nice warm soft pretzel with their beer?). Fittingly, though, the main focus of the event will be the beer itself. The anniversary celebration will double as a release party for the brewery’s new cask-conditioned ale, as well as for its very first bottled beer: a very limited (five hundred-bottle) release of imperial oatmeal stout aged in bourbon barrels.— Luke Tsai
Sat., Feb. 27, 12-11 p.m. Free. Facebook Event.

GIRL!
Shotgun Players (1901 Ashby Ave., Berkeley) recently began BLAST, its new annual month-long series celebrating difference through a line up of boundary-bending performances by local and international theater artists. This week, the series will offer GIRL!, “a cabaret-style evening of theatrical drag and drag-fueled theater with some of San Francisco’s finest champions of both.” The well-known San Francisco drag queen Monique Jenkinson (aka Fauxnique) and character artist Evan Johnson (who performs as Martha T. Lipton) have brought together a diverse group of artists who will riff on drag traditions in order to offer unexpected performances. The lineup includes Gina La Divina, Trixxie Carr, Miss Rahni, Dulce De Leche, and Katya Smirnoff Skyy. Performances are at 8 p.m. on February 25 and 26. They will, indeed, surely be a blast.— Sarah Burke
Thu., Feb. 25, 8-10 p.m. and Fri., Feb. 26, 8-10 p.m. 510-841-6500. $15-$20. ShotgunPlayers.org

Breaking the Silence Town Hall
As the culmination of Conjure Circle, its six-month-long art and activism event series, Impact Hub Oakland’s Omi Gallery (2323 Broadway) will be holding a town hall meeting on Saturday, February 27 to focus on the experiences of girls and women of color. The event is part of the national “Breaking the Silence Town Hall” series put on by the African American Policy Forum, which offers a platform for communities across the country to engage in a discussion about the experiences of women and girls of color as they relate to displacement, police violence, criminalization, sexual assault, domestic violence, and poverty. And as the event’s description reads: “We hope to create opportunities for local decision makers to listen to participants about the challenges they experience on a daily basis in their homes, schools, and communities, and identify opportunities for intervention.” The African American Policy Forum began the series in 2014, with the goal of creating a more gender inclusive racial justice vision. Since, the events have taken place in New York; Los Angeles; Miami; Washington, DC; Baltimore; Chicago; and Atlanta. The event is free, but registration is required.— S.B.
Sat., Feb. 27, 12-4 p.m. Free. BTSOak.EventBrite.com

Mark Baum: Elements of the Spirit
Mark Baum was born in what is now Poland in 1903 and barely survived emigrating to the United States in 1919. For thirty years thereafter, the painter succeeded in the New York art scene. But despite the popularity of his work, he decided in the 1950s to move away from his representational paintings, and until his death in 1997, developed an abstract art practice that merged spirituality with creativity. Eventually, Baum moved to Maine to paint fulltime from a converted barn and continue to contemplate spirituality. During that time, Baum began using a singular diamond-like symbol in various iterations to create all of his compositions, which he considered psychic maps to an enlightened existence. A retrospective of Baum’s late work, which has never been shown before, is now on view at Krowswork Gallery (480 23rd St., Oakland) in the show Mark Baum: Elements of the Spirt. At 2:30 p.m. on February 27, the gallery will host a free panel discussion on the artist’s life featuring the Contemporary Jewish Museum of San Francisco’s chief curator Renny Pritikin; UC Berkeley’s Center for Arts, Religion, and Education director Elizabeth Pena; and Baum’s son, Billy.— S.B.
Through March 12. Free. Krowswork.com