Now what? See below.

Hundred Dollar $tore
Oakland’s downtown will be welcoming its newest gallery into the 15th Street Corridor family on Friday, December 4. The Know Lodge (375 15th St.) is the brain child of local curator Joseph Lucas and street artist Julia Lewis aka Bud Snow. Lucas heads The Know Collective, which began as an Oakland-based micro radio station in 2004, and has been producing local art shows and performances for the past ten years. The first show he has curated for Know will open with the gallery. Entitled Hundred Dollar $tore, it will feature affordable art (all $100 or less) from celebrated local illustrator J. Otto Seibold, respected street artist Deadeyes, oil painter Alan Grizzell, and a handful of others. While the show is, in part, meant to encourage holiday shoppers to invest in the local artistic community, it’s also intended to be enjoyed by people who aren’t looking to buy art. As the venue’s name indicates, The Know Lodge hopes to be not only a gallery, but a place for artists and art appreciators to congregate. — Sarah Burke
Fri., Dec. 4, 6-10 p.m. Free. Facebook.com/KnowGallery

San Cha
Few things are off limits for singer, songwriter, and performance artist San Cha, whose onstage persona is something like a glamorous, high-femme Sid Vicious. The interdisciplinary musician made a name for herself in Oakland as a member of the queer electro-pop group Daddie$ Pla$tik, which combined a punk ethos with a loud, gender-bending club kid aesthetic that the band developed in the Bay Area’s drag scene. San Cha performs solo as well, and at one of her last shows before she left the Bay Area for an extended stay in Mexico and LA, she played a set wearing a white wedding dress before stripping down to sequined hot pants to sing a darkwave Madonna cover. A provocateur and exhibitionist, she joins The Lovemakers, The Trims, Irising, and Vainheim on stage at 924 Gilman on December 4. —Nastia Voynovskaya
Fri., Dec. 4, 7:30 p.m. $10. 924Gilman.org

While electronic music might seem like a young person’s game, Giorgio Moroder, one of its pioneers, is still active in the genre. The Italian musician is considered a founder of disco and made a name for himself in the European club scene before producing scores of hit songs for pop icons such as Donna Summer, Blondie, Janet Jackson, and Kylie Minogue in the Seventies and Eighties. For the past five decades, Moroder has been prolific as a solo artist, as well — though after putting out his fourteenth album in 1992, he took a hiatus from performing and focused on producing videogame soundtracks. However, he returned to pop after his features on Daft Punk’s 2013 album Random Access Memories sparked renewed interest in his work. Now, Moroder primarily performs as a DJ. He comes to 1015 Folsom on December 4. — N.V.
Fri., Dec. 4, 9:30 p.m. $25-$35. 1015.com

The Weeknd
Since the release of his debut mixtape, House of Balloons, Canadian singer The Weeknd has had an immeasurable impact on R&B and hip-hop. Suffice it to say that, along with that of Drake and Kanye West, his work has ushered in a new era of vulnerable, melancholic lyricism that was largely absent on the radio before House of Balloons came out in 2011. Over the past four years, The Weeknd has enjoyed a meteoric rise from noteworthy indie artist to chart-topper. His latest album, Beauty Behind the Madness, examines the dark underbelly of fame and the excess that comes with it. With lyrics such as I only love it when you touch me, not feel me/When I’m fucked up that’s the real me, The Weeknd isn’t trying to be a role model: He’s writing songs for the brokenhearted and reckless. As part of his The Madness Fall Tour, he performs at Oracle Arena with “Antidote” rapper Travis Scott and singer Halsey. — N.V.
Sat., Dec. 5, 7:30 p.m. $38-$95. Coliseum.com

Temescal Alley Holiday Artisan Fair
During this time of year, holiday craft fairs abound — ranging in size from huge warehouses to small galleries. On December 6, shoppers can make the Temescal Alley Holiday Artisan Fair their next destination for gathering gifts. The fair, which will take place in the charming Temescal Alley (right off 49th Street, just East of Telegraph) with enough locally made goods to fill, well, an alley. Rather than quantity, the focus at this fair will be quality. Offerings will include the custom ceramics of Atelier Dion, the wooden home furnishings of Melanie Abrantes, and the hand-painted and dyed lingerie of Serpent and Bow, among many others. Shops in the alley will also hold special events, including a holiday print sale at Interface gallery featuring local artists. For sustenance, Dona Tomas will be serving loaded nachos, and Rose’s Taproom — which is slated to open in the alley in 2016 — will be pouring freshly crafted beer. — S.B.
Sun., Dec. 6, 11 a.m.-4 p.m. Free. TemescalAlleys.com 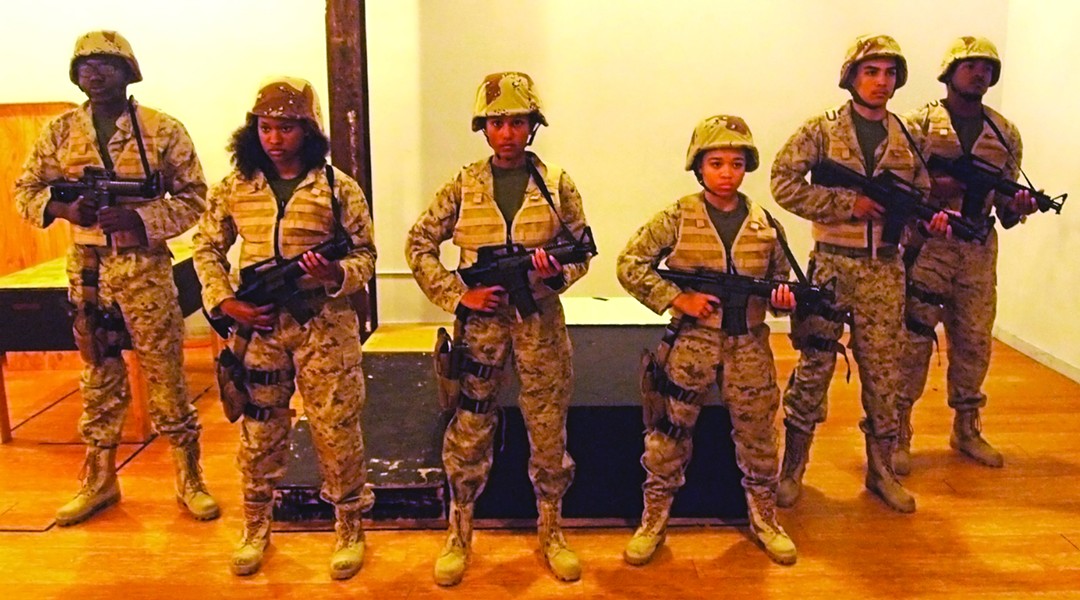 In the Bay Area, the experience of serving in the military is not a topic that often makes its way into casual conversation. But the newest production by Gritty City Repertory (GCR), entitled ReEntry, aims to offer a nuanced characterization of the experience of returning to civilian life after having served. GCR is a youth theater company and nonprofit with a cast made up entirely of at-Oakland high school students. And it doesn’t skirt topics that are difficult to digest. Through a cast of varied characters, from the wounded soldier to the commanding officer, ReEntry bravely tackles experiences of trauma and post-trauma re-assimilation. And in doing so, it offers a thoughtful analog for wars happening in Oakland’s own neighborhoods. “Oakland is a beautiful, diverse, vibrant city with a high-crime rate,” said Lindsay Krumbein, GCR’s founder and executive director, in a statement about the show. “Young people of color are disproportionately impacted. All kinds of studies show that the rate of PTSD in inner-city residents is as high or higher than that of Vietnam, Iraq, and Afghanistan war veterans.” ReEntry opens at the Flight Deck (1540 Broadway, Oakland) on December 3 at 8 p.m. and will continue through December 12. — S.B.
Through Dec. 12. $5-$50. GrittyCityRep.org