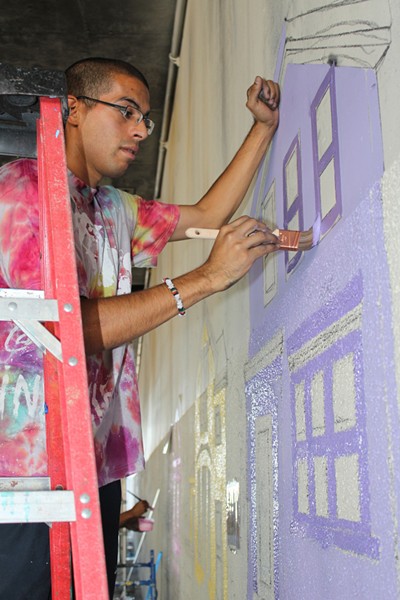 Artist and West Oakland resident Antonio Ramos was shot and killed Tuesday morning while working on a mural in a freeway underpass in West Oakland, according to Bay City News. Ramos was painting as part of the the Oakland Super Heroes Mural Project on West Street between 35th and 36th Street when he was shot around 10:30 a.m., according to reports. Police are still searching for the suspect.

The Super Heroes Mural Project is run by Attitudinal Healing Connection (AHC) of Oakland, an arts nonprofit that aims to empower communities through creativity. The Super Heroes project in particular pairs professional artists with West Oakland youth to collaborate on large-scale murals throughout West Oakland. The mural that Ramos was working is the third of six planned murals and is intended to depict a pleasant row of houses with white birds and a young girl flying above it. AHC has been fundraising through an Indiegogo campaign to gather funds to complete the project. (Learn more in the video below).

Since news of Ramos' death has spread, many of the artists who worked with him on the project or on other murals in the past have posted memorials on social media. One street artist who goes by "Scienceism" on Instagram posted a photo of Ramos painting and wrote, "Antonio's positive attitude and work ethic was truly unparalleled ... This deeply tragic senseless act of violence is exactly what he and AHC worked so hard to counteract in the Oakland community."

There is currently no known motive for the shooting.

A friend of Ramos' has set up an online fund to raise money for his family and funeral costs. You can donate here.