August 14, 2015
comment
Hey weekenders, here's the round up of non-work-related activities you've been waiting for since Monday. Enjoy!

Nicki Minaj
Is that a world tour or your girl’s tour? So rapped Drake in one of his twin dis tracks aimed at Meek Mill, the Philadelphia shouter opening for Nicki Minaj on Friday at the Concord Pavilion as part of her Pinkprint Tour. The versatile rapper Minaj once referred to herself as The only rap bitch on the Forbes list and now boasts her own wax sculpture in Madame Tussaud’s Wax Museum in Las Vegas, immortalizing a still from the flashpoint music video to “Anaconda.” Fans have already begun making pilgrimages to the sculpture and enacting lines from Minaj’s own repertoire, such as Let ‘em eat my ass like a cupcake. In other words, the answer to Drake’s question is obvious: It’s Minaj’s world tour — one she’s been poised for since at least 2010, when she dropped an unparalleled verse on Kanye’s “Monster” — and Drake’s barb only stings if you consider it inherently emasculating for a man to open for his girlfriend.
— Sam Lefebvre
Fri., Aug. 14, 7 p.m. $76+. TheConcordPavillion.com

Not Ur Baby
Vanessa Vigil is sick of going to male-dominated art shows. So, on August 15, the young, local artist will be presenting NOT UR BABY, an all-female group show at the Oakland Terminal. “As a woman artist, I am often surrounded by an abundance of male artists,” said Vigil in a recent email. “With NOT UR BABY, I want to shine a spotlight on the women artists in the area that may not always get that spotlight.” Her show will feature artwork from a handpicked group of eighteen women. A range of their works — from sculpture to collage — will be hung on the walls, while crystal jewelry, hand-sewn garments, nail art, and other goods will be offered at tables throughout the space. Meanwhile, DJ and diva Namaste Shawty will be spinning. The fresh-out-of-high-school electronic duo Bad Luck will also perform, as will the hypnotic, New York-based singer Lolo Zouai. The event is also a benefit for a relevant cause. All sales generated from pieces on a specific wall will go directly to MISSSEY, a local organization that works to combat sex trafficking in the Bay Area and alternative opportunities for sex workers.— Sarah Burke
Sat., Aug. 15, 5-10 p.m. Free. VaviVisuals.com 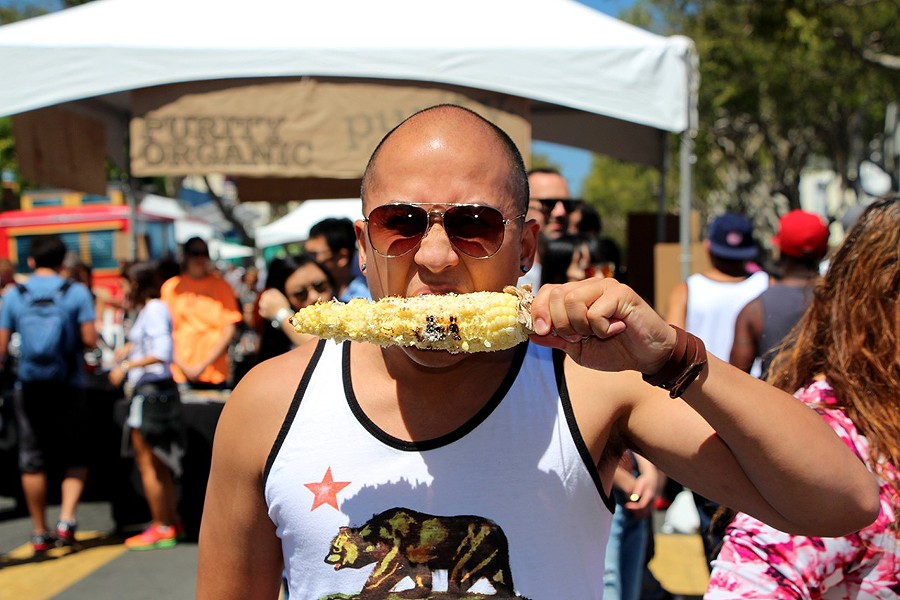 San Francisco Street Food Festival
This year, the preeminent celebration of the Bay Area’s street food scene, and of the small-scale entrepreneurs who make it possible, has a new, more spacious home at Pier 70 in San Francisco’s Dogpatch neighborhood, as well as an expanded two-day itinerary. As was the case in previous years, the East Bay will be well represented at the festival: KronnerBurger will be there slinging burgers; Cholita Linda and Los Cilantros will bring their A-plus taco game; and Revival Bar + Kitchen’s Sophina Uong is one of the chefs featured in the $150 five-course, spit roast dinner that will culminate the first night’s festivities. The festival itself is free to attend, with some of the proceeds from food and beverage sales benefiting the Mission district incubator kitchen La Cocina, which organizes the event — and whose alumni make up a large portion of its vendors.— Luke Tsai
Sat., Aug. 15, 11 a.m.-6 p.m. and Sun., Aug. 16, 11 a.m.-6 p.m. Free. SFStreetFoodFest.com

Oh No, There's Men on the Land
In the Bay Area, reminiscing about — and laughing at — the idealism of the Sixties and Seventies never seems to get old. In fact, even just looking at tie-dye can elicit a chuckle from many East Bay longtimers. That must be why, after big success during its four-week run in Spring, Karen Ripley’s Oh No, There’s Men on the Land is coming back to the Berkeley Marsh Center for the Arts on August 15 to stay through October 3. The show is a hilarious monologue that takes the audience through Ripley’s rollercoaster of experiences as a young lesbian in early-1970s Berkeley. Ripley has been making audiences laugh for 35 years, with a specialty in LGBTQ-centric comedy. During that time, she’s won many awards as a screenplay writer and performer. Her comedic charisma surely has a lot to do with the show’s return as well.— Sarah Burke
Aug. 15-Oct. 3 $15-$35. TheMarsh.org

The Berkeley Barb at Art House Gallery
There are many famous examples of how East Bay residents led the way in various social movements in the 1960s, such as the Free Speech Movement on the UC Berkeley campus and the early days of the Black Panther Party in Oakland. Founded in 1965, The Berkeley Barb was an underground newspaper championing the progressive politics of the day. The publication folded in 1980 but still remains online in archival form. On BerkeleyBarb.net, one can peruse the time capsules from this influential period, including an article profiling current California State Senator Loni Hancock when she was a young activist vying for a spot on the Berkeley City Council, and a letter from Black Panther Party founder Huey P. Newton about women’s and queer liberation. The Berkeley Barb is celebrating its fiftieth anniversary this month and will be the focus of a series of events, including an exhibition featuring artwork by Patricia Oberhaus, a former contributing artist to the Barb, as well as photos from the Sixties and Seventies by Harold Adler and John Jekabson. The exhibition opens August 9 at Art House Gallery with a potluck from noon to 3 p.m.— Nastia Voynovskaya
Through Aug. 14 Free. BerkeleyBarb.net