The Oakland Creative Neighborhoods Coalition is rallying members in the face of increasing obstacles. 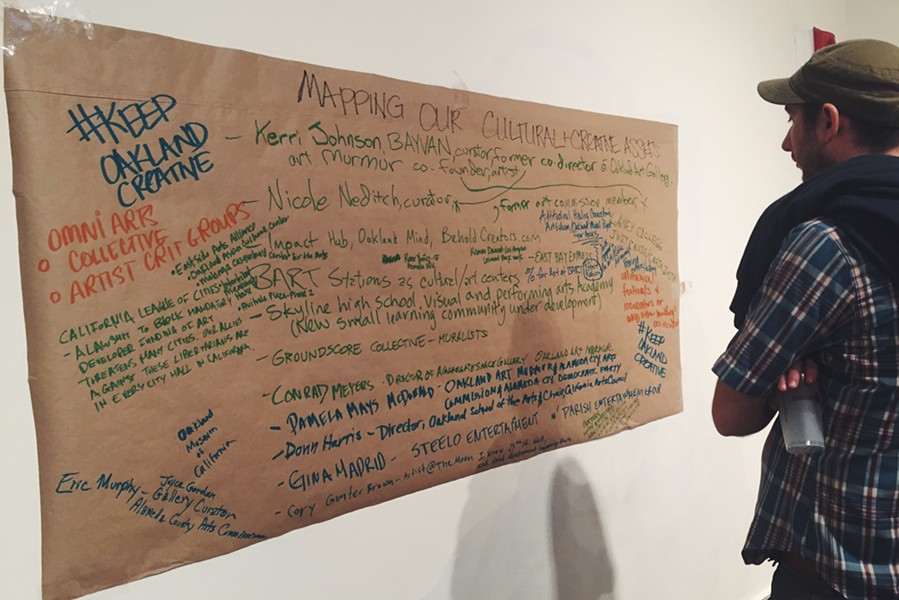 A group of approximately sixty people gathered at Betti Ono Gallery in downtown Oakland last Wednesday night for the second Community Priorities Meeting of the Oakland Creative Neighborhoods Coalition (OCNC). The room buzzed with concern as the assembly of Oakland arts professionals rehashed the top priorities identified at the first meeting: creative community health, the re-establishment of the Oakland Arts Commission, affordable housing, and the stabilization of creative and cultural spaces. As rents continue to soar in Oakland, artists and art spaces are increasingly facing the threat of displacement. OCNC is a grassroots attempt to develop and enact strategies for establishing security and collective advocacy for the Oakland arts community.

As the Express previously reported, OCNC was started approximately two months ago by Betti Ono founder and director Anyka Barber and Katherin Canton of Emerging Arts Professionals Bay Area. Now, the steering members also include longtime Oakland arts advocate Eric Arnold (a former Express staffer) and Solespace owner Jeff Perlstein. Their mission emphasizes that the growth and wellbeing of Oakland depends on the vibrancy of the arts community, with a focus on cultural equity, prioritizing racial and economic justice within their advocacy.


"Oakland is facing many crucial decisions at this moment. Massive displacement of low-income families, historically oppressed and people of color in adjacent cities is shifting the makeup of Our Town, is bringing a flood of resources for "development" and attention to our cultural vibrancy," reads the OCNC call to action. "This is the moment that the people of Oakland, each contributing to this cultural and urban hub, have to articulate and create the vision of neighborhood investment and development that we need."

OCNC's initial goal was to pressure the Oakland City Council to add more funds to the city's meager Cultural Funds budget, and to re-establish the long-gone Oakland Arts Commission. Members lobbied Oakland council members just prior to the finalization of the 2015-2017 city budget, but they were ultimately unsuccessful beyond drawing attention to the dire need for many local cultural spaces to receive support from the city in order to stay afloat amid rising operational costs. Meanwhile, at the end of May, San Francisco Mayor Ed Lee announced that he was increasing the city's arts funding to $7 million, and in late July the San Francisco Arts Commission announced its hefty plan to transform Treasure Island into an international arts destination by loading it with $50 million in public art.

Although the Oakland city budget has been established for the next two years, there are many challenges facing the Oakland arts community that OCNC can point its attention to. In fact, the last few weeks have been disheartening — and scary — for many involved in Oakland arts. In early July, Rock Paper Scissors Collective, the last remaining founder of Oakland Art Murmur, announced that it is being displaced because the rent for its space is going to be raised to market value. Soon after, Humanist Hall, a long time venue for community-oriented events, was declared a "nuisance" by the city because neighbors living in the adjacent condos complained of noise, resulting in fines that the Hall cannot realistically pay. Then the Building Industry Association announced a lawsuit against the city of Oakland to fight its percent for public art mandate that requires developers to set aside 1 percent of their budgets to fund public art projects, arguing that the requirement impinges on developers' First Amendment rights.

Ahead of Wednesday's OCNC meeting, core member Arnold published an in-depth piece on his blog, Oakulture, that outlined the art community's dire situation and delved into the unfairness of the lawsuit. He wrote:

"On the surface, economic growth might seem like a positive thing for Oakland; however, the boom—mainly confined to real estate and tech—has been a calamity for the arts scene. A few months ago, at a city-convened arts stakeholder meeting , arts advocates speculated on the irony of Oakland’s artists making the city cool, only to find themselves priced out. Although some advocates felt the percent for art requirement didn’t go far enough, it at least offered a glimmer of hope for the city’s artists. But the announcement of the lawsuit by developers could delay or even rescind any commissions under the ordinance, and casts a pall on any future attempts to redistribute the wealth flowing into the city among the creative community."

And to make matters worse, on the day of the meeting, it was made public that KONO, the nonprofit that runs Oakland's First Friday street fair — not to be confused with Art Murmur, the gallery collective that throws openings on First Fridays — is being sued by an angry former employee, and has also recently experienced multiple thefts in its offices that were likely committed by volunteers. All this amounts to a serious threat to the organization, which is already struggling to finance its monthly street fair that has played a crucial role in putting the Oakland art scene on the national map. (Although it's been disputed how beneficial the street fair actually is for local galleries.)

Now, more than ever, it seems crucial for local arts professionals to band together and demand support from the city. Some of the organizations being represented included Oakland Impact Hub, Just Cause, Skyline High School Visual and Performing Arts Academy, Oakland Art Murmur, Omni Arts Collective, Oakland Museum of California, Parish Entertainment Group, Joyce Gordon Gallery, East Side Arts Alliance and many others. OCNC is asking that member organizations — or individual members — sign a form of commitment promising attendance at one meeting a month, actions, and other available resources and dedication to the mission. The form will soon be made available online, but for now, interested people can sign up for the coalition's newsletter. At the meeting, Barber stressed that the coalition has long-term goals that would ideally require at least a year of commitment from members who are interested in effecting actual change in the city. "Honestly, it's going to take everybody's participation to make this happen." she said. "That's where we're at."

Despite the many issues that have recently come up, Wednesday's meeting focused on setting a solid foundation for how the coalition will operate and build membership. "My vision, my motivation at this point and for the future is to preserve and to continue to ignite creative and cultural expression in the region that is the Bay Area," Canton told me after the meeting. "I grew up here, I have an investment, my history is here, and I want my future history to be here."