June 05, 2015
comment
If you're not too busy preparing for the next Warriors win on Sunday night, here are some other fun events happening this weekend to keep you busy in the meantime.

Jonathan Richman
Anyone familiar with Jonathan Richman’s periodic artist-in-residence gigs at the Make-Out Room knows that his charisma is unmatched. The arch of an eyebrow or the brush of one finger upon two nylon strings on his strapless acoustic guitar will make believers out of hardened gig-goers. It’s nice when he sings, too, perhaps in lilting Portuguese or Spanish, about his fraught relationship with works of art, the merriment of a lesbian bar, the beauty of the natural world, or even the plight of Mumia Abu Jamal. Another thing about Jonathan Richman is that he’s lovely. Also, he clearly dislikes noisy air conditioners. Fans of his Make-out Room residencies know that he has that contraption shut the hell off. No telling whether he’ll insist likewise at Bottom of the Hill on Friday or Saturday, but if so, there’s a big window behind the stage that might let in a nice, cool breeze.— Sam Lefebvre
Fri., June 5, 8:30 p.m. and Sat., June 6, 8:30 p.m. $15. BottomoftheHill.com

Bay Area Book Festival
Earlier this year, we reported on a project to build a temple made out of books for the Bay Area Book Festival in downtown Berkeley (see “Berkeley’s Living Library,” 4/15). On June 6 and 7, the inaugural festival is finally taking place, bringing two full days of free readings, panels, workshops, and performances to various venues scattered around Berkeley. Those events include “Who We Be: An Un-Panel About Our Colorized Futures” featuring authors Jeff Chang and Adam Mansbach, comedian and activist W. Kamau Bell, and politically engaged artist Favianna Rodriguez. In another, journalist Christian Frock will interview Men Explain Things to Me author Rebecca Solnit. Other local favorites, including Michael Chabon (The Amazing Adventures of Kavalier & Clay) and Daniel Handler aka Lemony Snicket (A Series of Unfortunate Events) will also make appearances. Other panels to look out for include “Murakami & Me: Translator and Writer,” featuring seasoned Haruki Murakami translator Jay Rubin and Word for Word’s performance of Alice Munro’s famous short story “The Office.” In addition, there will be an array of exciting events for kids that go beyond arts and crafts. Go online for the full, overflowing, schedule of events with location details.— Sarah Burke
Sat., June 6, 10 a.m.-9 p.m. and Sun., June 7, 10 a.m.-8 p.m. Free. BayBookFest.org

D'Angelo and the Vanguard
December is known in the music industry as the worst time to drop a new title. But that didn’t stop D’Angelo, outsized R&B auteur, from rush-releasing The Black Messiah late last year. Impressively, but perhaps not surprisingly, the whole critical ecosystem rearranged itself to accommodate what was instantly heralded as the best musical statement in recent memory. And it was a statement: The Black Messiah emerged in response to protests in Ferguson and the broader national racial dynamics they emblematized. In many commentators view, that put The Black Messiah in league with Sly Stone’s There’s a Riot Goin’ On, another highly textured, doted-upon album that spoke to and reflected choppy times. We’d heard from D’Angelo since his previous full-length, 2000’s Voodoo, on guest spots and in concert, where he would often tease new material. But D’Angelo is a classicist, meaning that only an album felt like the proper vessel for his art — unless you’re partial to concerts, in which case prepare to hustle dearly for tickets to The Fox Theater on Sunday.— S.L.
Sun., June 7, 7:30 p.m. Sold out. TheFoxOakland.com

Lisa Zeiler & Jennie Chabon
As one-third of the avowedly radical folk trio Rebecca Riots, Lisa Zeiler performed on five albums and toured extensively, a tenure sustained in no small part by the group’s fervent following at home in Berkeley. At the same time, Zeiler nurtured a collaborative relationship with vocalist Jennie Chabon, a cantor for Congregation B’nai Tikvah in Walnut Creek. Together, the guitarist and vocalist recorded three albums, each containing globetrotting roots sensibilities inflected by the cantorial Yiddish tradition. Their stated goal is to uplift, imparting the spiritual dimension at the core of their collaboration to any room full of listeners. On Sunday, the audience is sure to be receptive. For decades, Rebecca Riots’ sanctuary was Berkeley’s Freight & Salvage, where musicians Kevin Weber, Kaila Flexer, Phil Gorman, Julie Batz, Shelly Ball, and Harry Wittenberg will join Zeiler and Chabon.— S.L.
Sun., June 7, 8 p.m. $18, $20. TheFreight.org

Pints for Paws
Berkeley Humane’s second annual beer festival promises to bring together the beer geek and the animal lover — and if you happen to fall into both camps, then this sprawling, dog-friendly event at 1050 Parker Street in Berkeley was tailor-made for you. The price of admission includes a commemorative pint glass that guests can use to sample at least eighty different beers from the more than twenty craft breweries on hand. And since it’s rarely a good idea to drink on an empty stomach, there will be plenty of food for purchase available thanks to several prominent Bay Area food trucks and other vendors, including Fist of Flour, No Worries Filipino Vegan Cuisine, Grilled Cheez Guy, and Slowhand BBQ. Advance tickets are available through the Berkeley Humane website or EventBrite.com. All proceeds will benefit Berkeley Humane’s work toward saving the lives of East Bay dogs and cats.— L.T.
Sat., June 6, 2-5 p.m. $45, $50. 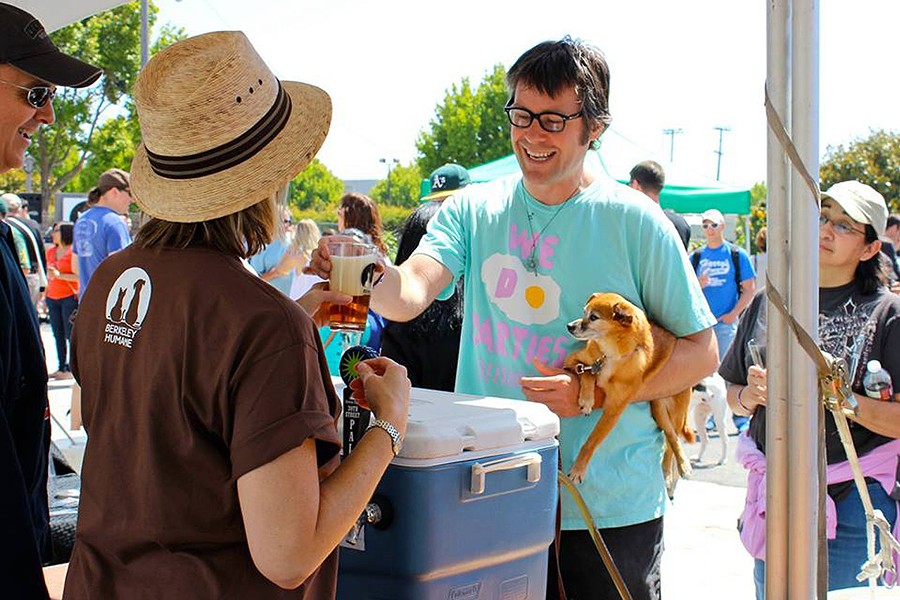