The former Rilo Kiley band leader supported her most recent album, The Voyager. 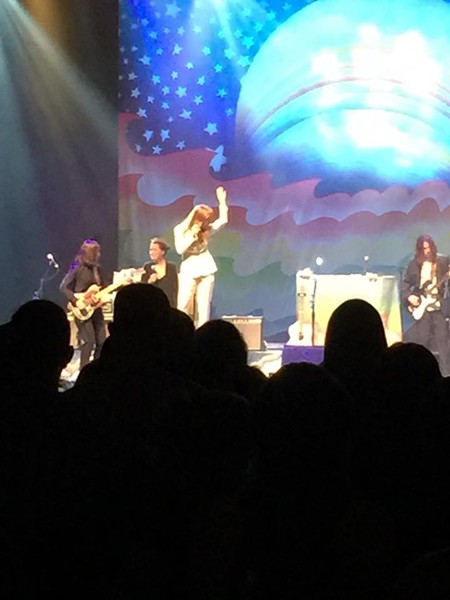 The cover of Jenny Lewis’ most recent solo album, 2014’s The Voyager, bore a palette of colors reminiscent of posh ice-cream packaging: seafoam green, bleached yellow, and sky blue, all softly grading across Lewis’ white suit coat. Last night, Lewis and her backing quintet brought those pastels to the Fox Theater, appearing before a capacity crowd with a massive backdrop bearing amorphous orbs. Lewis, decked in the familiar suit, twirled a rose and flung it into the crowd during her first song, “Head Underwater.” It starts I’ve been wearing all black.

Which hints at the complexity of her material: A preternatural songwriter compared to every historic ray of sunshine pop supposedly native to California, Lewis is also a sentimental tactician who inverts tropes and navigates the treacherous arena of lyrics likely to get pegged as “confessional.” She can fill six and seven verses a song with minutiae of misery but never gets verbose or ham-fisted. She can also sympathize with a recently-defeated boxer, like Manny Pacquiao. Last night, she dedicated “You Are What You Love” to him, a song flush with so much imagery – It’s a sleight of hand/A white soul band/The heart attacks I’m convinced I have – that it’s hard to know what exactly she meant.

The sometimes-inscrutable but reliably evocative lyricist is also a consummate presence on stage. She mustered swagger for the “The Moneymaker,” then shooed away her male band mates to perform “With Arms Outstretched” – an acoustic number from Rilo Kiley’s 2002 album, The Execution of All Things, one of the best-lasting statements from the Saddle Creek Records era – with two backing vocalists, knowingly removing her hands from her pockets to enact the song’s titular promise as it went along. A little brown box rested at the foot of the mic. Lewis struck a different pose every time she foot on it.

“One of the Guys,” the lead single from The Voyager, sounded resplendent. Lewis’ spunky alto is perfectly suited to the snappy central sentiment. One line goes, When I look at myself all I can see/I’m just another lady without a baby. It’s a knotty lyric lodged in a silken single. In concert, Lewis halted her band to bring particular attention to it. Presented like a proud declaration, the crowd took it like one.

The Voyager is full of easily missed nuance and subtlety like that, but it’s also enjoyable as a glossy pop-rock record, one that fulfills the imperatives of townie and college radio programming alike. There’s more craft at play than in the pedestrian dreck designed to be ignored and appease “modern” “alternative” Pandora keywords, but Lewis’ most recent album appeals to the same sensibility. You could reduce it to shrewd careerist maneuvering, sure, but Lewis’ discography is a series of signposts indicating her eventual arrival at a style that’s universally palatable. She now works slyly towards listeners' pleasure center instead of assailing it with prosaic flurries of jarring imagery.

Still, as “Love U Forever” faded out and a volley of colorful balloons rained over the crowd last night, Lewis’ older approach reemerged. The cymbals swelled, the guitarist began to intimate a familiar melody, and Lewis started uttering the long lyrical salvo of “A Better Son/Daughter,” another Execution of All Things track. The first section is a scene of quotidian suffering. Lewis concluded it with a memory: When your heart was open wide and you loved things just because/Like the sick and the dying.

Then the band erupted. The glorious caterwaul of martial snare drum and seething guitar was not nuanced; it was thunderous and sheer and Lewis sputtered “fuck” repeatedly. Closing gestures are often exultant like that, but this was simply one of the evening’s strongest moments, which underscored the fact that there’s little of such structural might matched to frank expression of emotional extremity on The Voyager.

During the encore, however, Lewis performed a new song, "Girl on Girl." A punchy new-wave number, perhaps the line Kill your idols and fuck your friends signals a return to form.