Late Saturday night, local musician Emilio Nevarez was taking equipment out of The Golden Bull in downtown Oakland, where he'd performed earlier in The Lucky Eejits, when he was fatally struck by a stray bullet. A second shot injured another bystander. Every musician has hauled gear out of a club late at night, and the tragedy reverberated throughout and beyond the music community. A memorial materialized on the sidewalk. Countless tributes appeared online.

No one was apprehended at the scene and initial coverage was vague about the events that precipitated the shooting. But the next day, Damon Gallagher, owner of nearby Hi-Life Pizza at 15th and Franklin streets, apparently felt certain about exactly where to place the blame. Late Sunday night, he walked over to Vinyl, the hip-hop-oriented nightclub that's next door to The Golden Bull, which regularly hosts live rock bands. Security footage shared with the Express shows Gallagher blaming Vinyl for the shooting, and taping hand-written signs to Vinyl's window before walking away with a twelve foot-long rug.

One sign read, "THE COMMUNITY HAS DECIDED THERE IS BLOOD ON YOUR HANDS." Apparently incomplete, it continued, "VENUE IS SHUT DOWN LEAVE OR FACE YOUR—"

Oscar Edwards, the owner of Vinyl, was inside the club at the time. He noticed the signs, consulted the security footage, and recognized Gallagher. "It was a total surprise," he said in an interview. That same night, Edwards walked over to Hi-Life Pizza, where he saw Gallagher preparing more signs inside. Edwards knocked on the window and Gallagher came outside. “The first thing Damon [Gallagher] said to me was, ‘Yeah I did it,’” Edwards recalled. In the following conversation, a video recording of which Edwards shared with the Express, Gallagher began by saying to Edwards, "Your fucking club has been a scourge since day one." Gallagher's expletive-laden rant devolved from there.

The video shows Gallagher repeatedly daring Edwards to call the cops. Edwards said he didn't want to. After exhausting hope for a civil discussion across a span of more than twenty minutes, though, he capitulated. OPD arrived, detained Gallagher, and cited him for stealing the rug. The police asserted that the notes left on Vinyl's window didn't amount to a credible threat.

“If I had done that, I would’ve gotten arrested,”reckoned Edwards, who is Black. Gallagher is white.

When reached by phone, Gallagher said that there's a meeting tonight at the Oakland Marriott City Center Hotel at 7 p.m. for residents and city officials to address crime in the neighborhood, but he declined to comment further for this report. On Facebook, though, Gallagher corroborated the detainment in detail. He also stated his intentions for the rug, writing, "I also took a cheap carpet from outside which I was going to return with the names of the victims." 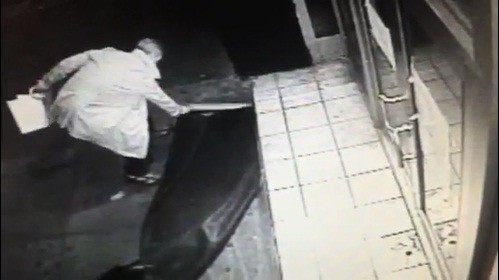 But accounts from Edwards, Edwards' security guards, and Vinyl's security footage show that rather than causing harm, Vinyl employees helped the victims and tried to apprehend the shooter.

Vinyl's surveillance footage shows that the security guards were startled into action by the shots. One guard bolted after the shooter and another immediately tended to the victims, calling for towels. Contrary to initial reports, the intended target did not flee the scene. Edwards and bystanders heard the motorcyclist stating immediately after the shooting that he was the intended target.

Edwards said that the owners of the Golden Bull thanked him for his security guards' proactive response to the violence.