Matt Fraction and Michael Chabon will be celebrating the release of the new Casanova volume at Escapist Comics on Saturday.
This weekend you could sit on your couch and watch that sportsball game everyone is really hyped about. Or you could see the best Taiko drummers in the world, get a book signed by Michael Chabon, or any of the other options we rounded up for you below. If you schedule your time right, you could even do them all — and still have time for the big game.

Kodo
Drumming fulfills practical and ritual roles in cultures around the world, and it has done so throughout recorded history. Everyone can intuit the reason:  Deep percussive pulses rattle the primal instincts latent in our psyches, as if a mallet striking stretched animal hide could undo centuries of civilization’s social conditioning. Few ensembles resonate with listeners’ primordial core like Kodo, the world’s best-known practitioners of Japanese Taiko drumming. An ancient practice with roots in Japanese myth, community, and war, Taiko drumming involves the merciless bashing of massive unpitched drums with mallets, typically by chiseled, shirtless men. As you watch in the comfort of Zellerbach Hall, where Kodo is set to perform on Saturday, be mindful not to regress too far for polite society.— Sam Lefebvre
Sat., Jan. 31, 8 p.m. $28 and up. CalPerformances.org

For the average football fan, Super Bowl Sunday is a celebration not just of the well-timed blitz and the thrilling last-minute touchdown drive, but also of the indulgence of our most hedonistic (and often carnivorous) appetites: jumbo-size pizzas piled high with sausage and pepperoni, and heaping trays of deep-fried, sauce-slathered chicken wings. This year, Colleen Patrick-Goudreau, an Oakland-based vegan cookbook author, offers an alternative. On Sunday, Patrick-Goudreau will celebrate the release of her latest book, The 30-Day Vegan Challenge, at the vegetarian restaurant Encuentro with a menu that puts a vegan twist on a number of tailgate party favorites: “frankies in blankies,” buffalo “nuggets” with cashew-based “blu cheez,” and so forth. And for the football diehard, the good news is that the event ends early enough that you can still get home in time to catch the second half. Tickets are available via EventBrite.com.— Luke Tsai
Sun., Feb. 1, 2-5 p.m. $25. JoyfulVegan.com

Michael Chabon and Matt Fraction
Pulitzer Prize-winner Michael Chabon is one of the East Bay’s most beloved authors. He’s famous for The Amazing Adventures of Kavalier and Clay (2000), a novel that chronicles the lives of two immigrant brothers who get rich by creating a comic book character called The Escapist. Back in 2013, Chabon announced that he would make his first foray into comic book writing by contributing to Casanova: Acedia, the fourth volume in the critically acclaimed Casanova series. The series was thought up by writer Matt Fraction and artists Fábio Moon and Gabriel Bá. It follows a sly thief-for-hire named Cass Quin, who gets thrown into different dimensions of time and reality, along with various dangerous situations surrounding the evil international spy organization, E.M.P.I.R.E, which is run by his father. In Acedia, Quin finds himself stuck in Los Angeles with no memory of his past. The volume will feature a series of backup stories written by Chabon and illustrated by Bá. The long-awaited first issue of the volume will finally be released at the end of January. To celebrate, Fraction and Chabon will be at Escapist Comic Bookstore (3090 Claremont Ave., Berkeley) on Saturday from 1:30–4 p.m. —Sarah Burke
Sat., Jan. 31, 1:30-4 p.m. Free. EscapistComics.com

Super Bowl 2015 at the New Parkway 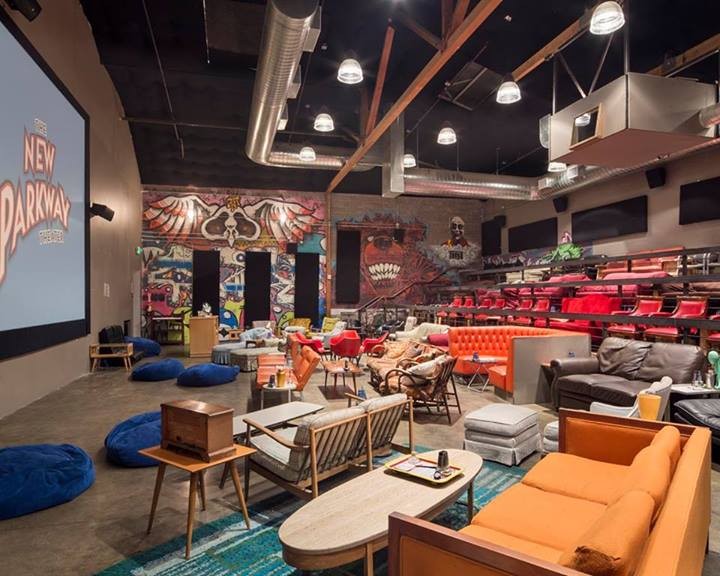 So none of your friends want to host a Super Bowl party this year after the chicken wing incident of 2014? Oh, it’s actually that you don’t have any friends in general? Or is it just that you like the beer and pizza that they serve at The New Parkway (474 24th St., Oakland) better than the usual delivery and kegs? In any case, all are good reasons to spend your day of consuming large amounts of greasy foods and all-American advertising at your local, indie movie theater. The New Parkway has the couches, drinks, and food to host your whole group of sports-loving friends — or just you! It also has a screen big enough to provide the most immersive spectating experience. In fact, it sounds like the ideal venue to get rowdy and scream at a projection with a theater full of fellow football fans. All The New Parkway asks is that Patriots and Seahawks fans don’t fight.— Sarah Burke
Sun., Feb. 1, 3:30 p.m. $15. TheNewParkway.com

Endless Gestures of Goodwill
Endless Gestures of Goodwill is Sheldon B. Smith and Lisa Wymore’s attempt at creating a never-ending folk dance, one that’s not identifiably derived from any one tradition. Wymore is an associate professor of dance and director of the dance program at UC Berkeley, and Smith is an associate professor at Mills. To create the piece, the two used custom-made software to compile 250 short clips of quick gestures reminiscent of various folk dances being performed. The movements don’t flow into one another with total smoothness, but they evoke a sense of continuity — a movement that never stops, as the video loops. The two-channel piece is projected onto two wall-sized white slabs that have been erected at the back of the Mills College Art Museum (5000 MacArthur Blvd., Oakland), with a shadowy gap between them. Prompted by a motion sensor, the figures on each slab begin to dance as the viewer enters the space. Although the two never touch or interact, they appear to be dancing together, conversing in a kind of gestural language that avoids showing roots in one cultural legacy, but represents a universally relatable sense of momentum through movement.— Sarah Burke
Through March 15. Free. MCAM.Mills.edu