Eraj Asadi Two dancers at A previous Figment festival in New York City. Figment is coming to Oakland this Saturday.
I know you're tired from waiting in line at the polls this week...or waiting for hours outside H&M to snag the new Alexander Wang line. But, hey, Oakland's got a new mayor now, and all that fancy sports gear is totally sold out. So, my fellow Americans, get revved up for a weekend full of cultural sustenance.

but what you want is far away 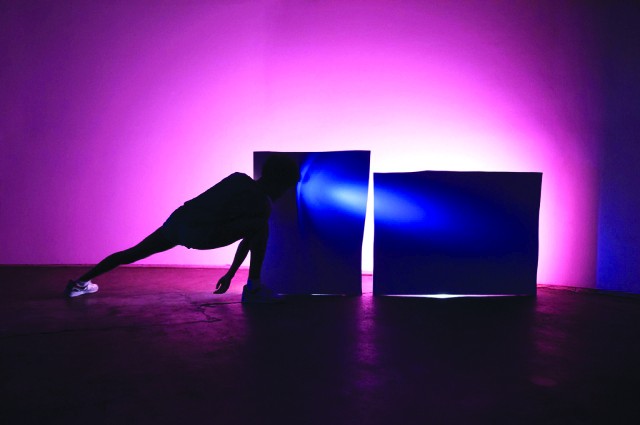 Many of the most engaging performances are those that elude disciplinary categorization, challenging the viewer to jump between habitual, media-specific modes of reception until they blur into a mess of indescribable experience. That is the kind of performance that one can likely expect from but what you want is far away. The show, which will take place at the Oakland Museum of California on Friday, will combine new poetry, dance, music, and visual art. The centerpiece of the night is the world premiere of “god sees everything,” a dance-driven piece choreographed by Phoebe Osborne that interrogates the understanding of California as a symbol of abundance, and explores its connection with psychedelic experience and the pursuit of transformation. The piece will involve three main performers, a chorus of dancers, and a live score by Colin Self. It was commissioned in conjunction with one of OMCA’s current exhibitions, Fertile Ground: Art and Community in California, which celebrates the importance of artistic community by remembering four influential groups of artists whose mutual inspiration catalyzed shifts in California art history. With this performance, audiences have the chance to see that kind of work happening now. — Sarah Burke
Friday, Nov. 7, 7:30 p.m. $5-$10. MuseumCA.org/FarAway

The folks behind Club 21’s Funny Fun and other LGBTQ-centric comedy events across the Bay Area are bringing you their inaugural comedy festival this Wednesday through Sunday. Hella Gay Comedy Festival will sweep Oakland and San Francisco with five nights of themed comedy, offering something for everyone. The festival will kick off at Club OMG (43 Sixth St., San Francisco) with Underwear Comedy Night, featuring straight men telling jokes in their underwear. On Thursday, the popular Fag Hag Comedy Night will take over OMG, in which female comedians battle to be named “Miss Fag Hag 2014.” That same night, the White Horse Inn (6551 Telegraph Ave., Oakland) will host the Butch vs Femme Comedy Show, featuring an all-lesbian lineup. On Friday, the Homo Says What Comedy Show will take over Club 21. And on Saturday, the It’s Okay, My Friend is Gay Comedy Show is happening at the Layover, with a queer-friendly bill of straight comedians. That’s just a sample of the dense lineup, which culminates with the Big Gay Gala at Supperclub (657 Harrison St., San Francisco) on Sunday. The stand-up will be complemented with male strippers and burlesque.— S.B.
Friday, Nov. 7, 7-9 p.m. $10. HellaGayComedy.weebly.com

The term “golden age of hip-hop,” which roughly encompasses the late 1980s and early 1990s, is somewhat obnoxious, because putting a premium on the past always devalues the present. It’s refreshing that Yerba Buena Center for the Arts avoids the expression in its description of Clas/sick Hip-Hop: 1993 Edition, in which Ensemble Mik Nawooj and the Kev Choice Ensemble recreate tracks from crucial hip-hop albums by artists such as Wu-Tang Clan and Snoop Dogg, while twenty local emcees handle the rapping. This year, as Souls of Mischief’s ’93 Til Infinity turns twenty-one years old, looking backwards is a natural impulse. Yet it’s telling that the very beginning of hip-hop was more recent to the Hieroglyphics crew in 1993 than ’93 Til Infinity is to upstart rappers today. And after all, that album title insists on hurtling towards the future. — Sam Lefebvre
Friday, Nov. 7, 8 p.m. and Sat., Nov. 8, 8 p.m. $25. YBCA.org

Figment Oakland
Figment Oakland sounds a little like a mini, family-friendly Burning Man taking place in Mosswood Park this Saturday. It's a free, volunteer-driven participatory art festival that will host over 70 interactive art projects including installations, musical performances, games, and craft workshops. The idea is to create a temporary space without creative restrictions, where everyone is welcome to touch the art. The festival began in
2007 in New York City and has already traveled to ten cities in three countries this year, although each festival is vastly difference because it relies on local creative communities for content. Among the projects are mobile fire sculptures by FLUXcycles, a "Museum of Unnatural History" featuring found objects from around the neighborhood by BLAH, and a decked out mobile cinema in the back of a box truck called "The Box Theater."  It's totally free, too, so there is no reason not to take part. — S.B.
Saturday, Nov. 8. 11 a.m. - 5 p.m. Free. Oakland.FigmentProject.org

Little is known about the Russian composer Pyotr Ilyich Tchaikovsky’s personal inspiration for Symphony No. 5. One notebook entry dated shortly before he began writing it in 1888 describes the first section in a flurry of grandiose words typical of the romantic era. Apparently, he meant for the music to stare down fate, perhaps capitulate to faith, and express something about Providence. The symphony, full of sweeping gestures, ornamentation, and a beautiful recurring theme in each section, reflects such philosophical preoccupations, if you’d like it to. Today, musicians more often cite life’s minutiae as inspiration, which is fantastic. Yet Tchaikovsky’s fifth symphony attests to the emotional resonance of nineteenth century music’s universal questions, even when they lack answers. The Oakland East Bay Symphony, under the direction of Michael Morgan, presents Tchaikovsky’s fifth on the season’s opening night at the Paramount Theatre. — S. L.
Friday, Nov. 7, 8 p.m. $20 and up. OEBS.org