"Footprints of Invisible Giants" by Takehito Etani, who will be at the East Bay Mini Maker Faire this weekend.
Finally, the weather is cooling down. You can cozy up with a beanie and a hot cup of coffee and not melt away when you try to head to events. A lot of people have been complaining about having a rough, hot past two weeks, but don't you worry because Mercury is halfway out of retrograde. Whatever that means. Point is: things are lookin' up from here on out. Here are some events to celebrate the coming of fall:

Profligate, the solo outlet of Noah Anthony, alternates largely between icy minimalism and industrial techno clamor. The listening pleasure of his 2012 album, Come Follow Me, largely springs from how Anthony conflates the two while also incorporating disarming pop elements. The album opens with “Vixen,” a twelve-inch-length, vocal-hook-laden track that denies the anticipated dance section. “Suppression” is a memorable, minimal synth composition hinged upon little more than what sound like light breathing and water droplets echoing someplace very dark, still, and unhappy. Choked keyboard squeals break up heavy synth slabs and punishing low-end on the aptly titled “Barrier Earth,” which is the closest thing to the sort of bleak techno that Anthony will bring to Oakland at Riddim (581 5th St.) on Saturday. Encapsulate, another solo electric act tied to the eclectic Ascetic House collective in Arizona, shares top billing, along with DJ sets from the people usually found at high-quality, goth-inclined techno and noise events in the Bay. — Sam Lefebvre
Saturday, Oct. 18, 9 p.m. $7 RiddimDanceHall.com

East Bay Mini Maker Faire You’d be surprised to learn how many of your neighbors are secretly makers. The East Bay Mini Maker Faire is mini in comparison to the massive event it’s named after, but it’s still hosting a huge array of local creators this year at Park Day School. Maker Faires are all about celebrating invention, creativity, and resourcefulness. Mini Maker Faire is smaller-scale, but the ideas are just as big. The exhibitors represent fields such as arts and crafts, biotech, and robotics. Also on offer: seed bombs (guerilla gardening ammunition!), a needle-felted, ten-foot-tall T-Rex, a “Pineapple Pop-Up Trike Bar” (a side-by-side tandem bike with a bar), DIY screen-printing by Grease Diner, and a whole bunch more. In addition to the exhibitors, the event offers three stages of talks, performers, and a workshop room that will be packed with programming. Among those are an at-home cheese-making tutorial, a panel on “The Importance of Junk,” and a presentation called “Drones, Planes, and Flying Robots.” It’s the perfect place to get inspired and bust out of that creative rut. — Sarah Burke
Sunday, Oct. 19, 10 a.m.-5 p.m. $11-$20 EBMakerFaire.Wordpress.com

Discussions about food waste run the risk of coming across as prudish or nagging. As daunting as the statistics are (100 billion pounds of food go uneaten in the US every year), no one enjoys being reminded of the unused vegetables and leftovers they’ve left to rot in the back of the fridge. “Feed the 5,000,” a first-of-its-kind event (in the US, anyway) taking place this Saturday in Oakland’s Frank Ogawa Plaza, takes a different, more celebratory tack. The hook? Five thousand attendees will receive a free vegetable soup lunch made entirely from fresh ingredients that would have otherwise been thrown away — hundreds of pounds of crooked carrots, odd- shaped sweet potatoes, and other “ugly” vegetables, all harvested from local farms but deemed unfit for retail sale. The event will also include cooking demonstrations, tips on how to use up leftovers, and a giveaway of several hundred pounds of produce. — Luke Tsai
Saturday, Oct. 18, 12-5 p.m. Free. EndFoodWaste.org

Marga Gomez is back in the East Bay and better than ever. In Lovebirds, her tenth solo show, now playing at The Marsh Berkeley, Gomez takes us on a trip (sometimes literally) through the interwoven love lives of a quirky, motley crew of characters in New York’s Greenwich Village during the swingin’ Seventies, with an eccentric photographer, Polaroid Phillie, guiding us. Phillie makes her living selling $10 “vintage” Polaroid photos to unsuspecting couples, doling out somber advice, and telling stories of couples she once knew. Lovebirds is short (seventy minutes with no intermission), thoughtful without being preachy, and an incisive look at the pursuit of love in all the wrong places. Gomez reminds us that the Seventies were a time when “the lesbians kept getting screwed, but not by each other,” via satirical observations, comical stereotypes of the “gay ladies discotheque,” and a cast of characters who are well-meaning but perhaps not the brightest folks when it comes to love (but then, who is?). Come to the show’s closing night October 18, and you and your lovebird might get to smooch in a constructed “make-out box” in the Marsh’s lounge. — Anna Pulley
Fridays, 8 p.m. and Saturdays, 8:30 p.m. Last Weekend! $20-$35. TheMarsh.org

An Audience with Meow Meow
When it comes to cabaret-style performances, you can’t get more original than Meow Meow, the international singer-slash-comedian-slash-crowd-surfer who has worked with the likes of David Bowie, Pina Bausch, and Mikhail Baryshnikov. The Australian-born firebrand’s latest, An Audience with Meow Meow at Berkeley Rep (2015 Addison St., Berkeley), is her first foray into an extended-run musical play (capping at about ninety minutes). Part slapstick, part burlesque, part torch-y song numbers, and a decent amount of audience groping, Audience stars, naturally, Meow Meow, aka Melissa Madden Gray, who brings a signature blend of loopy and bawdy antics to the threadbare plot. Meow Meow is a diva who sings, dances, changes costumes onstage, pulls Exit signs off the wall, and naps on pianos — all while smoking a cigarette. Audience is nothing if not a transgressive performance, one in which the fourth wall is obliterated as if by glitter bomb and the entire audience is expected to sympathize with Ms. Meow’s plights, of which there are many. While the first half is a panoply of LOLs, Meow Meow’s entire plot of “Oh no, my show is getting canceled!” gets a tad old after about an hour. Once the show does finally get “canceled,” the pace slows way down, and continuing to care about Meow Meow’s antics becomes a struggle. But despite a few lulls, Meow Meow is a delightful and strange beast, and one of the most innovative chanteuses performing today. Watching her crowd-surf almost up to the back rows of the orchestra section was pretty close to purrfect, as far as entertaining theater goes. — A. P.
Friday, Saturday, and Sunday. Last Weekend! $29-$89. BerkeleyRep.org 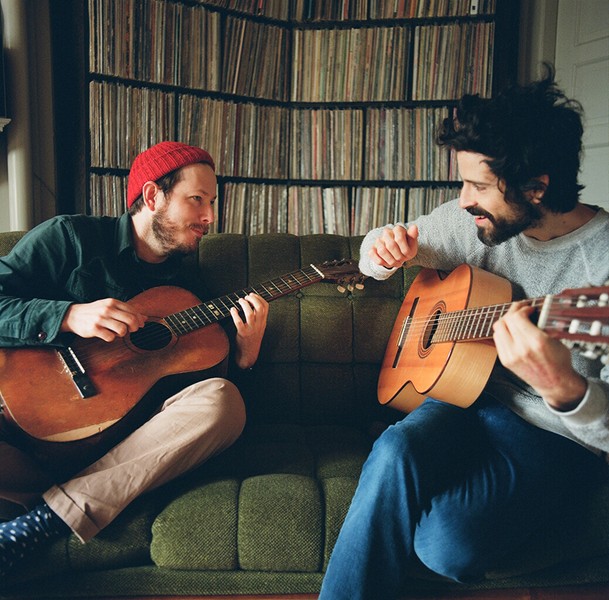 Bonus!!
Folk sweethearts Devendra Banhart and Andy Cabic will be playing at the Berkeley Art Museum on Friday for their L@TE series (which has a great lineup this fall). Then on Saturday, Betti Ono will be presenting a panel called "Meditations On Digging: Creative Practice and Theories of Future-Making" featuring some very rad local artists and activists.