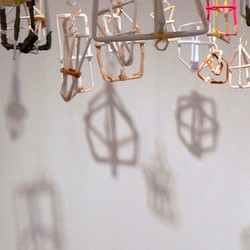 The NIAD Center in Richmond has recently announced their weekly Affordable Art Online Exhibition (AAOE) Series. Each week, a creative personality gathers a couple of works for the online show, surrounding a theme of his or her choice. All of the pieces are priced between five and one hundred dollars, and the diversity of media and styles reflects the spectrum of independent artists with disabilities who work with the center’s visual art program. With a rise in popularity in online art services and auctions, NIAD's new project shows their consideration for contemporary art's trends while still supporting their artists.

The first show, hosted by writer Jennifer McCoy, was titled Hands Up, Don’t Shoot. This emotional and timely central theme reflects on McCoy’s recent experiences living in St. Louis, just miles from the tragic turmoil in Ferguson. Her blog features personal essays and thought threads, and her online collection similarly evoked emotions of frustration and disbelief. Drama is clear in the works she chose – strong, saturated reds and yellows are the backgrounds of many figures in the titular pose. A portion of the proceeds for the inaugural show went to the Michael Brown Memorial Fund.

The second show, titled Bay Area Inspired, was curated by Oakland Art Enthusiast, and featured works priced between $30 and $100. There were familiar scenes, such as storefronts in The Mall by Jean McElvane, picturesque Bay Area postcard vistas like Danny Thach’s watercolor Golden Gate Bridge, and abstracted images of Bay Area sights and experiences.

A new show titled Shock and Art was just launched. These works, curated by writer Courtney Eldridge, makeup the new series' best collection yet, in terms of both the diversity and quality of the works.

If the piece you have your eye on is already sold out, the center has an extensive online store, ranging from greeting cards to Jeremy Burleson’s sculptural lamps, which have been featured at the Berkeley Art Museum.