May 09, 2014
comment
Like many Americans, local poet Zoe Tuck is leery of government surveillance, violence, and the culture of fear it has spawned in many parts of the world, including her own backyard. But she’s also grapples with the fact that she comes from a position of privilege. How to reconcile the two? “Whereas many prose forms require explicit transitions or justifications for the movement between topics, poets can sometimes get away with juxtaposing to apparently different topics or ideas or images and asking readers to make an imaginative, rather than a logical, leap.”

For the native Texan, the best tools are words — poetry, to be precise. “Poetry is well equipped to deal with those abrupt juxtapositions,” she said. “The benefit of using this medium is juxtaposing the jail network with, say, the California poppy.”

Guiding us from Joaquin Miller Park to the Gaza Strip and introducing us to witches and onion-sniffing death machines along the way, Tuck explores these themes — and many others — in her new chapbook, Terror Matrix, which will be released on Friday, May 9 at Oakland’s newly opened E.M. Wolfman’s General Interest Bookstore (13th Street and Broadway). The chapbook was published by Timeless, Infinite Light — a small press dedicated to publishing local, contemporary poetry. 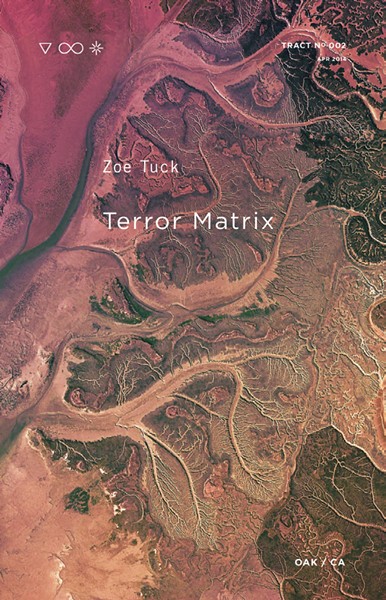 Tuck found Timeless, Infinite Light through what she described as a “thriving East Bay literary scene.” In fact, Tuck moved to the Bay Area six years ago precisely because of the area’s rich history of literary excellence and concordant activism. “Oakland has a proud activist tradition of writers,” she said.

The founders of Timeless, Infinite Light were attracted to the area for similar reasons. Unsatisfied with the literary scenes in Olympia, Washington and New York City, the group of young writers finally settled in Oakland. “It’s weird poets, like Zoe Tuck, that were the draw for us here,” said Otis Pig, Timeless, Infinite Light’s co-founder.

And Tuck is equally thrilled to be working with Timeless, Infinite Light. “There are benefits of working with a small press,” she said, “because we have the autonomy to make something that doesn’t look like everything else on the shelf.”

Tuck will read from Terror Matrix today at 7 p.m. The event is free. Copies of Terror Matrix ($15) will be available for purchase.