On Monday, The Coup's label Epitaph Records attempted to purchase a sponsored Facebook post to promote its new video for "The Magic Clap" (which is awesome, BTW) — and today, the Oakland hip-hop outfit's leader Boots Riley wrote on his Facebook page that he thought the site was censoring the video because of its political message. It turns out, according to Facebook, it was not a case of censorship (phew!) and the site has agreed to approve the sponsored post.

Riley explained by phone that the sponsored post was denied multiple times, leading him to look through Facebook's Ad Policy and Guidelines, which said "ads may not contain content that exploits political agendas." The first version of the post did contain the word "shit," violating Facebook's polices, but subsequent messaging did not include the word.

The Express contacted Facebook, whose policy team looked into the problem and responded with this statement: "It was originally disabled because one of our systems detected improper language in the post. In the second instance, the ad was mistakenly rejected by one of our reviewers." 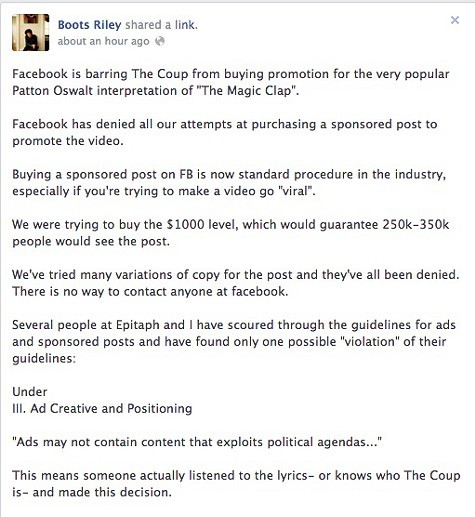 Check out the video for "The Magic Clap," coming soon to your Facebook feed:

The Coup Facebook The Magic Clap Video
Prev
Next