When Jason Perkins, managing partner at Parish Entertainment Group, which owns Brick & Mortar and The New Parish, concluded that the management of a San Francisco Travelodge refused a band whose rooms he had booked lodging booked because they were black, it was the band itself — namely, The Meters's founder and guitarist Leo Nocentelli — who consoled him. We spoke to Perkins on Friday night, still in a state of shock about what had happened.

Nocentelli (a 2013 Rock and Roll Hall of Fame nominee), Bill Dickens (Stevie Wonder's bass player), and session drummer Felix “D-Kat” Pollard were allegedly refused lodging at the Travelodge Central in the Mission District on Thursday, Oct. 18, after they tried to check in post-soundcheck at nearby Brick & Mortar.

"Leo called me and said 'they won't let me check in,'" said Perkins. 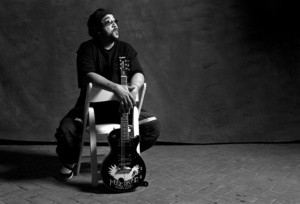 When Perkins showed up around 7:30 p.m., the band was standing outside while Rich Vogal, keyboardist for Galactic, who was performing with Nocentelli that night, was already inside the hotel. Vogal, the only white member of the group, had checked in earlier that day without any problems.

Perkins told us he argued with the manager through a hole in a plastic window, pressing him as to why he would not even let the band into the lobby. The manager told Perkins the hotel "didn't take credit cards from those people," finally admitting that by "those people" he meant "black people."
When Perkins called the police to the scene, they said this was not the first time they'd had similar complaints about that Travelodge. The police tried to negotiate a full refund for Perkins, which the hotel denied him. Eventually Perkins found new logding for the entire band, checking out Vogal of the Travelodge as well.

When Perkins moved from shock to embarrassment, continuing to apologize to Nocentelli, the legendary funk guitarist from New Orleans appeared unfazed.

"I grew up in the south," Nocentelli told Perkins. "I'm older than you."

Perkins said Nocentelli maintained his sense of humor through the entire ordeal, pointing at the dark-skinned hotel manager, who appeared to be of South Asian decent, and saying "you're not much whiter than I am."

A post on The New Parish's Facebook page has resulted in more than 200 comments and hundreds of calls and emails to Travelodge corporate. 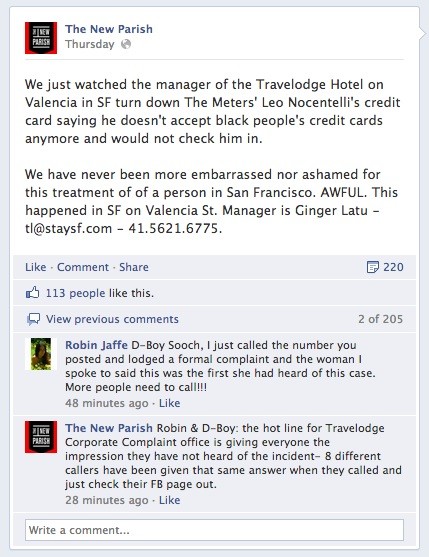