Image Comics Expo
It was 1992 when a group of Marvel Comics' best-selling artists — fed up with the lack of creative license and financial returns afforded to them by their work for the corporate comic-book publisher — made the decision to start Image Comics, a publishing company revolutionary both for encouraging quirky publications (like an illustrated anthology of Belle and Sebastian songs) and for having a creator-owned model that allowed artists ownership of the works they created. It's that credo that gave Robert Kirkman the chance to write a comic book in what was then an unpopular genre — zombies — and, later, the autonomy to adapt what becameThe Walking Dead to television. "It was really kind of a grand experiment to create a company founded on the idea of creative ownership and creative freedom," said Kirkman, who today is one of five partners in the company. "All other entertainment companies take stabs in the dark until something catches on. And then they latch onto it and milk it for all it's worth." Kirkman's just one of a dream team of Image partners, founders, and affiliates appearing at the Image Expo, a three-day celebration of the company's twenty years, at the Oakland Convention Center (1001 Broadway) on Friday through Sunday, February 24-26. The exhaustive weekend-long event includes panel discussions on topics like women in comics, Image's conception, and adapting comic books to television; plus small artists' workshops led by established illustrators like Spawn creator Todd McFarlane; and the requisite Q&A and autograph sessions. Guests can also patronize comic-book vendors and pick up special products only available at the expo. "Those are hot items on eBay," Kirkman quipped. "So I recommend people come early and come every day." Fri. 3-8 p.m.; Sat. 10 a.m.-6 p.m.; Sun. 10 a.m.-5 p.m.; $20-$150. 510-451-4000 or ImageComicExpo.com. — Cassie Harwood 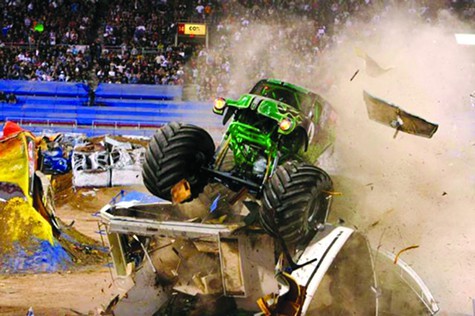 Advance Auto Parts Monster Jam
While some steer clear of monster-truck rallies and their raucous, beer-guzzling crowds and exorbitant displays of high-powered car-crushing, others may argue that such qualities are precisely what make the events so epic. The latter crowd is in luck on Saturday, Feb. 25, when Monster Jam, the widely traveled and well-known monster-truck tour, makes a pit stop at the O.co Coliseum (7000 Coliseum Way, Oakland). This round of the tour features sixteen 10,000-pound trucks, including the legendary Grave Digger, which turns thirty this year. Find out what middle-age looks like for a vehicle that's spent its days bashing into and jumping off of things at ridiculous speeds. 7 p.m., $12.50-$125. 800-745-3000 or MonsterJam.com. — Cassie Harwood

I'm With Cupid 2
Ignore the fact that Valentine's Day was over a week ago and just get thee to St. Alban's Episcopal Church (1501 Washington Ave., Albany) on Sunday, Feb. 26, for the second-annual I'm With Cupid. Last year's event was a heartfelt, hilarious tribute to old-school girl groups, featuring songs performed in the style of classical recital by amateur musicians; this year's show — part of Pegasus Books' postmodernist-lit event series First Person Singular and a benefit for the tutoring program WriterCoach Connection — promises to be an equally good time, with a theme of "new wave pleasures and post-punk paeans." 8 p.m., $10 donation. 1stPersonSingular.com. — Ellen Cushing

Go Outside
For fuck's sake.

Dr. Ula Y.Taylor: "Black Women in American History and Culture: Michelle Obama"
She's not just the president's wife, a Harvard- and Princeton-educated legal mind, or the owner of the most toned arms on the face of the planet. Michelle Obama is all of those, things, of course, but she also represents a distinct and important place in African-American women's history, a much-studied object lesson in how far our society has come and how far we still have to go. That's what American Studies PhD and UC Berkeley professor Ula Taylor discusses in her recent article "Michelle Obama: Too Black and Too Strong," and it's what she'll talk about at the African American Museum and Library at Oakland (659 14th St.) on Saturday, Feb. 25, as part of the library's Black History Month series. Consider it your patriotic duty. 10 a.m. and 1 p.m., free. 510-637-0200 or OaklandLibrary.org/AAMLO/Index.html. — Ellen Cushing