Still don't have any weekend plans? We've got your back.

Solano Stroll
The term "stroll" implies a leisurely walk, but taking in the sheer volume of attractions scheduled for the 26-block expanse that is the Solano Stroll requires more of a sprint, or at least some serious speed-walking. More than 250,000 people are expected to attend the festival, now in its 37th year and featuring a parade, Ferris wheel, juried arts and crafts show, and "Green Zone" for energy-saving tips — plus around one hundred different entertainers and food booths. On Solano Avenue between San Pablo Avenue and TheAlameda (Albany and Berkeley) on Sunday, Sept. 11. 10 a.m.-6 p.m., free. 510-527-5358 or SolanoStroll.org. — Cassie Harwood 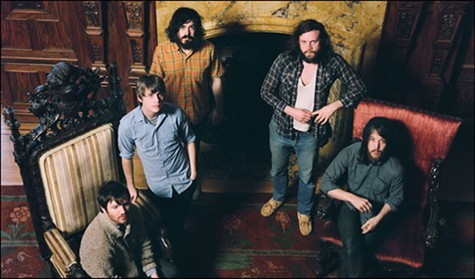 Fleet Foxes
A lot of modern bands have tried to emulate the Sixties folk sound, but few have succeeded as uniquely and non-annoyingly as Seattle's Fleet Foxes. Much of that can be attributed to the band's gorgeous and expertly-executed multi-part harmonies, as evidenced by its self-titled debut, released in 2008 on Sub Pop. The band is also big on dynamics, building quiet folkie parts into a dramatic, entrancing stereo sound more fit for a concert hall than a coffee shop. Fleet Foxes' most recent release, Helplessness Blues, continues to draw from the Sixties folk tradition with a strong focus on vocal harmonies, but with added attention to nontraditional instrumentation, including hammered dulcimer, wood flute, tympani, twelve-string guitar, tamboura (a long-necked lute), Marxophone (a fretless zither), clarinet, music box, Tibetan singing bowls, and vibraphone. "SimSalaBim" begins with delicate acoustic guitar-picking and singer Robin Pecknold's sensitive voice — reminiscent of Graduate-era Simon & Garfunkel — then delves into a lush, orchestral wall of sound. Live, Fleet Foxes' harmonies are reportedly goose-bump-inducing, and the Greek Theatre (Hearst Ave. at Gayley Rd., Berkeley) should be a perfect setting to absorb it all when the band performs there with The Walkmen on Saturday, Sept. 10. 8 p.m., $39.50. APEConcerts.com. — Kathleen Richards

Anthony Mynt and Karen Leibowitz present Mission Street Food
Mission Street Food has little in common with the recipe-heavy, food-porn photography spectaculars most folks are used to, which is appropriate since Mission Street — a pop-up restaurant held two nights a row in a run-down, unpopular spot called Lung Shan, in San Francisco's Mission District— was not your typical restaurant. The book is the first of McSweeney's "Insatiables" cooking imprint, and the book's gorgeous design and sometimes-sarcastic, highly subjective, and deeply entertaining tone will fit right on the bookshelf with your Believers and Millard Kaufman novels. Proceeds from the book itself go to Slow Food USA, despite, as Myint and Leibowitz write in the book's opening pages, Mission Street Food's tight bottom line, sometimes irresponsibly sourced ingredients, and "bravado regarding fast-food chicken." But in the world of Mission Street Food, you can have your tea-smoked eel and eat your Popeye's Chicken, too. At Books Inc. (1760 Fourth St., Berkeley) on Saturday, September 10, 5 p.m., free. 510-525-7777 or BooksInc.net. — Stefanie Kalem

Of Dice and Men
Some audience members compared Cameron McNary's latest production to Chekhov, probably because of the denseness of the language and McNary's knack for teasing drama out of real-life situations. In this case, the term "real-life" might be a point of contention, since Of Dice and Men is largely centered around a fantasy game. McNary tells the story of five people — and one interloper — who've structured their lives around the role-playing game Dungeons & Dragons. While the script directs a lot of barbs at nerd and sci-fi subcultures, and includes jokes about Peter Pan syndrome (i.e., the Dungeon Master who still lives in his parents' basement at age thirty), it also provides astute commentary on fandom, obsession, war, and the channeling of male aggression. The always-terrific Seth Thygesen stars as an improbable moral compass, but Jai Sahi steals the show as his obnoxious, geeky friend. Director Melissa Hillman creates a world of remarkable verisimilitude. Through Oct. 1 at LaVal's Subterranean (1834 Euclid Ave., Berkeley). $12-$20. 510-224-5744 or ImpactTheatre.com. — Rachel Swan

A Walk in the Wild: Continuing John Muir's Legacy
Rick Deutsch first hiked Yosemite National Park's Half Dome — a steep granite crest rising nearly 5,000 feet above Yosemite Valley — back in 1990. More than 20 years later, he has made the arduous 16-mile trek 31 times, written the first and only guidebook devoted to the hike, and earned the nickname "Mr. Half Dome." (He said it's not uncommon, on his frequent visits to the site, to see hikers with his book in hand.) Deutsch is one of a handful of "Modern Day Muirs" — a group of environmental researchers, activists, scientists, and other notable nature enthusiasts — being profiled by the Oakland Museum of California (1000 Oak St., Oakland) in conjunction with its new exhibit, A Walk in the Wild: Continuing John Muir's Legacy. He'll share his Half Dome how-to and other hiking knowledge at the museum on Sunday, September 11 (12:30 p.m. and 2 p.m., free with admission). — Cassie Harwood

Eat Up: At B-Dama, a new, non-pretentious izakaya place on Piedmont Avenue.

Drink Up: At Uptown's Bar Dogwood — ignore the slight sense of preciousness and enjoy the delicious cocktails and well-executed charcuterie.