What’s happening around the Bay in music? Lots! Let’s recap, shall we?

1. New Club Night in Oakland: When it comes to nightlife, Oakland is definitely on the come-up. But Starr Piwowarski says the city still lacks a “great dance night.” Which is why she helped start a new club night in Oakland called “Club Drama.”

Held at the Uptown on the last Thursday of the month, the event features “familiar indie dance tracks all while offering a large selection of electro and dance remixes to really give you that dance-club feeling that you can't find unless you make your way across the bridge,” wrote Piwowarski in an e-mail. Sample artists include Marina and the Diamonds, The Gossip, Dragonette, Martin Solveig, Ke$ha, Ladytron, The Presets, Amanda Blank, Crystal Castles, MSTRKRFT, Goldfrapp, Simian Mobile Disco, Peaches, and more.

Club Drama is also “queer positive,” she says. “With a full lineup of gay DJs, we welcome gay, straight, bi, transgendered, queer oriented and people of all ages over 21.” Club Drama had its first event last month. The next one will be held Thursday, April 28. $5. For more info. 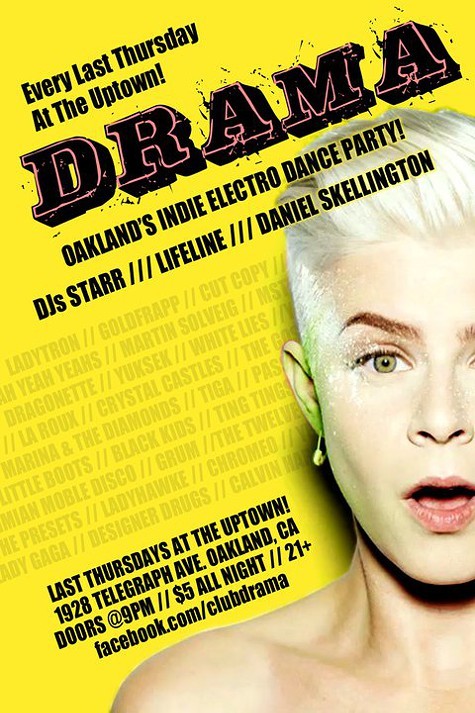 2. Tonight, local rap duo Foreign Legion will premiere its new movie Night Moves, in tandem with the release of its new album of the same name (release date April 12). “It’s a sitcom about two struggling rappers who have just inked their first major-label deal, and are trying, against all odds, not to screw it up,” according to Express music editor Rachel Swan. Check it out the screening tonight at 8 p.m. at Disco Volante (347 14th St., Oakland), followed by a live performance by Foreign Legion.

3. Jean Quan's proposed budget for the city of Oakland includes eliminating the entire budget ($730,120) for arts grants. A budget workshop will be held Monday, April 11, at Joaquin Miller Community Center.

4. Another hit to local radio: Local/community radio fans are still reeling from the loss of KUSF from the airwaves (though it can be heard online here), and now comes word that Stanford radio station KZSU (sister station to KUSF) has launched a campaign to protect its signal. In a press release today, the station said the proposal to move KUSF-FM’s 90.3 broadcast transmitter out of San Francisco and to Mount Beacon in Marin County would be at a much higher elevation and thus could disrupt KZSU’s signals through parts of the East Bay and the northern SF Peninsula. Supporters of KZSU are asked to send letters by April 15th to: KZSU Business - Attn: Save KZSU, P.O. Box 20190, Stanford, CA 94309.

5. Japan Benefits: Local musicians are banding together to raise money for the tsunami/earthquake victims in Japan. This Sunday, April 10, Cafe du Nord will host a local Americana Showcase and benefit. Confirmed performers include Tippy Canoe, Kit & The Branded Men, Toshio Hirano, Misisipi Mike, Belle Monroe & Her Brewglass Boys, 77 El Deora, Little Anne and the B-Star Wranglers, and The Chazz Cats. Tickets are on a sliding scale: $10-$15.

On Thursday, April 17, Japan-based vocalist Charito will perform a benefit, with the Eddie Ramirez Band, at the Piedmont Piano Club (1728 San Pablo Ave.) in Oakland’s Uptown district. Tickets are $30.

And though they’re no longer local, WHY? is having a charity auction featuring rare test pressings, original lyrics, album notes, and more. According to the band, “the most coveted item on the list is the Golden Ticket #4, where the highest bidder will have their own personal theme song composed and recorded by WHY?” Here’s a video of Yoni Wolf explaining the auction amongst the “suburban wilderness” of Mason, Ohio. Looks like Oakland. Not...

7. In local band news, Thao & Mirah are releasing a debut album on April 26 via Kill Rock Stars and embarking on tour. Catch them at the New Parish on May 3.

Also, local gypsy-rock band Diego’s Umbrella (featuring occasional EBX contributor Jake Wood) is seeking funds for a new van, after theirs was totaled in a car accident in Tahoe last November. You could win a bike tour with Wood. Help ‘em out here.

8. What other sites are talking about: Steven T. Jones at the Guardian ponders whether Burning Man, which will form as a nonprofit next month, is selling out.

The Mercury News interviews Duran Duran, who are trying their damndest to pretend like it’s still 1981. They play on April 16 at the Fillmore.

Or not talking about: The ambitious, relatively new local music site One Night Music, which paired hi-def video with intimate performances and hipster artwork, is, not so surprisingly, dead. … Unfortunately living up to its name, Going.com is going away as of May 1, 2011. In an email, the company said the move was part of “AOL’s refocusing” (AOL bought the startup two years ago). The site, mobile site, and apps will also go away. Event listings will migrate to Patch’s hyper-local sites.

9. Video of the Day: This just-released crazy booty-bass track “Drop It On The 1” by Zion I & The Grouch.