As an employee of the San Francisco Green Festival, Zakiya Harris knows that the mainstream eco movement is pretty much an all-white affair. There’s no green event in the country that targets people of color, she says. So three years ago Harris launched her Grind for the Green organization and held a music event of the same name at Yerba Buena Center for the Arts, using hip-hop as a way to spread the message of a healthy, ecologically minded lifestyle to youth of color. But even holding the event became a challenge. “When you say ‘hip-hop’ and ‘youth,’ people get scared,” noted Harris. This year the folks at Yerba Buena didn’t offer a date to host her event (which, she says, has been incident-free since its inception). 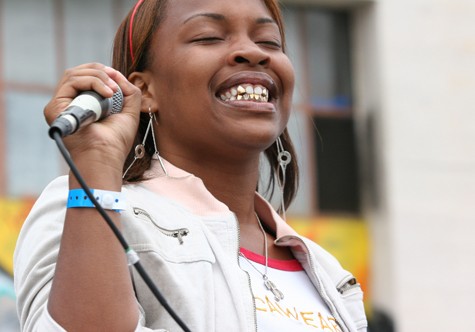 Since her funding from the City of San Francisco also dried up, Harris decided to move the festival to Oakland, where she currently lives. “It’s a homecoming of sorts,” she said. Harris also rechristened the event “FreshFest,” citing the fact that “fresh” has always been a hip-hop term, while “green” connotes whiteness. She launched a national “Get Fresh” campaign in June, whose web site MyGetFresh.com aims to be the “hip-hop generation’s official guide to the green movement,” including an “eco-hop” jukebox and videos on how to become more green.

Living a healthy lifestyle that minimizes harm on the environment isn’t a new or a white concept, Harris says. “We’re rooting it in our indigenous wisdom,” she said, adding that there are elders in the community who’ve been practicing such concepts for much longer than the word “green” became fodder for Stuff White People Like.

Her FreshFest will be held on Saturday, August 14, from noon to 6 p.m. at Mosswood Park in Oakland. Hosted by The Coup’s Boots Riley, the free event will feature a solar-powered DJ set by Pete Rock and performances by Erk tha Jerk, Nu Dekades, Do D.A.T., and Holly Saucy. There will be composting and recycling on site; bike-powered smoothies for sale and solar-powered cooking demos by the Environmental Service Learning Initiative (a program of Global Exchange, which is co-presenting the festival); food tastings by Mandela Marketplace of West Oakland; aquaponic demos by Kijiji Grows; recycled art and storytelling; booths for community organizations; art installations (including one on the connections between toxicity and violence); and more. Three handpicked groups will also perform environmental hip-hop songs. (“Serious emcees” can audition on Saturday, August 7, from noon-2 p.m. at the Oakland Green Youth Arts & Media Center, 2781 Telegraph Ave., Oakland). Harris encourages participants to bring their own water bottles and lunches to minimize waste.

Since Grind for the Green’s funding is in transition, Harris says they’ll begin fund-raising this fall. Considering the financial strain that all nonprofits are under, she says they’ll have to get creative. She’s floating one idea of creating their own solar- and bike-powered rig to rent out to others, since she currently has to rent theirs from “hippies up north.” She only connected with them, she says, because of her connections to the San Francisco Green Festival.